An odd job labourer was jailed nine months and 14 weeks and given six strokes of the cane for damaging an ambulance, spitting on cops and assaulting his teenage girlfriend.

In August last year, the police received information about a drunk man in Ang Mo Kio. When they arrived, they saw Muhammad Shawal Said, 24, lying on the floor. He was given a drip by a paramedic, Mr Joshua Tan, as his blood sugar was low.

The paramedics then loaded him into the ambulance.

Mr Tan tried to communicate with Shawal to establish his medical condition. 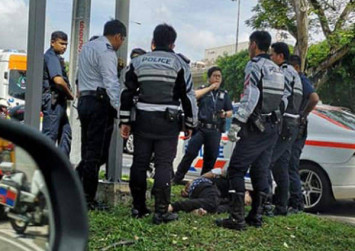 But Shawal shouted vulgarities at him and started to kick inside the ambulance, resulting in damage amounting to over $1,000.

He was sent to Yishun Community Hospital. While there, Shawal spat five times on a police officer on escort duty for him.

Shawal's right hand had been handcuffed to the bed frame as he was receiving drips, but he jerked his hand and kicked the bed frame.

He hurled vulgarities at the police officer after being told his grip restraint could not be loosened. He spat on the officer when told to calm down.

In October, the police received a report that Shawal had beaten his 16-year-old girlfriend.

Her mother made a report after the victim contacted her with a passer-by's mobile phone.

Shawal had met the victim through Facebook in August and got into a relationship with her in September. 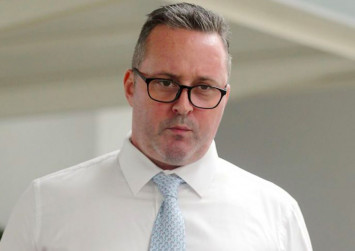 On Oct 1, they went to his bedroom. The victim then said she wanted to go home because it was late, but Shawal refused to let her leave.

Days later, when she told him she wanted to leave, he punched, kicked and slapped her multiple times.

He then took a knife and pointed it at her forehead and neck and told her not to leave.

Medical reports revealed that she suffered multiple bruises on her body.

Shawal also spat on an Aetos auxiliary police officer on Dec 24 while he was in lock-up at the State Courts.

In mitigation, Shawal's lawyer presented testimonies from his godparents on his good character.

Four other charges were taken into consideration during sentencing.