We've seen a teacher manhandle a student in Singapore before.

Now, another video of a similar incident has surfaced.

A September 2018 clip of a teacher manhandling a student at Whitley secondary school went viral after first appearing on Sunday (Jan 20).

In it, a female teacher is seen grabbing the shirt of a male student and attempting to drag him out of his seat.

The Bishan school's principal Anba Saroja told AsiaOne that the teacher was telling the boy to leave the classroom. 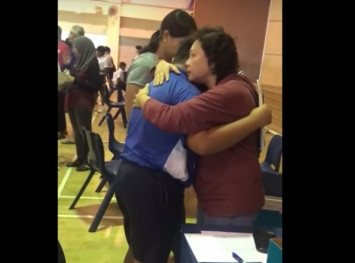 It "arose because the student was disruptive… and affected the learning of his classmates," she wrote in an email.

"The school views this incident very seriously and does not condone inappropriate behaviour by teachers, relief teachers, or students."

She added that the adult is a relief teacher, and both parties have been counselled and have apologised to each other.

Although the caption for the re-posted video - which has 2,400 shares and 1,200 comments as of noon - is "Like that is consider abuse or not [sic]? Ministry of Education, is this how your teachers discipline kids now," most of the viewers were in opposition, siding with the teacher.

The occasion elicited much nostalgia for the 'good old days':

One commenter chimed in with the observation that teachers going viral is a very real thing these days:

An MOE spokesperson confirmed that the boy is a current student but did not address the status of the relief teacher.

ALSO READ: Man who watched St Hilda's Sec students fight is not a teacher but an intern, school clarifies