SINGAPORE - Shui Poh Sing, 60, who owns a business popularly known as Ah Seng Durian with his brother, was on Tuesday (May 7) sentenced to three weeks' jail and fined $5,000 for evading taxes. He was also ordered to pay a penalty of $77,077.91.

Shui and his brother Poh Chung, 57, had earlier pleaded guilty to not paying taxes, including failing to register for Goods and Services Tax (GST) when their revenue exceeded $1 million.

The prosecution had sought a jail sentence for Shui Poh Sing, who is the managing partner of the firm, and in charge of its accounts and record-keeping.

The court heard last week that they had inherited Shanghai Moh Lee Seng minimart from their father, who died in 1999.

It ceased operating on Feb 20, 2012, and they moved the business operations to Seng Chung Trading, also known as Ah Seng Durian, that they had set up.

Senior tax prosecutor Patrick Nai, from the Inland Revenue Authority of Singapore (Iras), told the court that the undeclared income earned from the sale of durians by Seng Chung Trading was used to finance the mortgage payments for the brothers' respective properties in Malaysia. 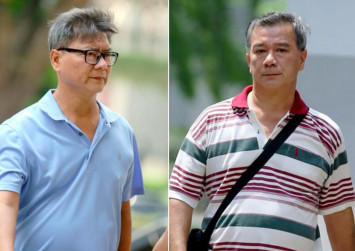 Under the GST Act, the older Shui was required to notify the Comptroller of GST and register the business for GST by Jan 31 the following year but he failed to do so.

Defence lawyer Vinit Chhabra told District Judge Adam Nakhoda there was a mix-up which could be attributed to the brothers using one single bank account for both their private and business matters.

Income went into the account and payments went out, without a fixed method of keeping track.

He added that Shui Poh Sing handled the accounting work of the business, despite having no training in accountancy and this could have led to some lapses.

The older Shui took up the task when their accountant retired after their father died, the lawyer told the court.

But since investigations into their tax offences started in 2014, the two brothers have engaged a professional accountant the following year to ensure their books are in order, Mr Chhabra said.

Iras had earlier stressed that there will be severe penalties for those who wilfully evade tax.

"Taxpayers are ultimately responsible for the information declared in their income tax returns. Penalties for tax evasion can be up to four times the amount of tax evaded. Jail terms may also be imposed," it said in a statement.