Ongoing BTO projects that were delayed by the Covid-19 pandemic to be completed in 2 or 3 years: HDB

Northshore Edge in Punggol, one of three projects completed ahead of their revised probable completion date this year.

SINGAPORE - The Housing Board expects to complete all Build-To-Order (BTO) projects that were delayed by the Covid-19 pandemic in two to three years.

Giving an update on such projects on Saturday (July 30), HDB said more than 7,200 flats were completed in the first half of this year, up from the previous two years.

There are nearly 100 HDB projects under construction, excluding those sold in the February and May exercises this year, said HDB in a statement. These projects have estimated waiting times from 2 to 5.4 years, and a median waiting time of 4.3 years.

"HDB has been working closely with our consultants and contractors, putting in place measures to reduce construction delays and supporting our partners to secure the necessary resources, so that flat buyers can move into their new homes as soon as possible," Mr Tan said.

These efforts include helping its contractors to prioritise work areas, securing manpower and material supplies, as well as getting special waivers for less noisy construction activities to be carried out over the weekends where feasible.

The 7,200 BTO flats already completed this year are spread across six projects — three of which more than a month ahead of schedule, HDB said. 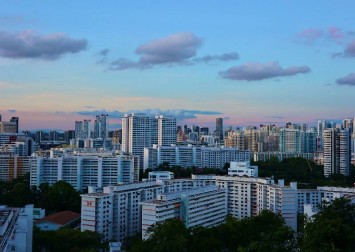 The total surpasses that posted for the same period in 2020 and 2021 of 2,485 and 6,275 respectively, as the Covid-19 pandemic curtailed construction works due to border restrictions and safe management measures.

All six had their original completion dates postponed due to the pandemic, which the flat buyers were informed of about three to nine months ago, said HDB.

The waiting time for the six completed BTO projects completed in the first half of the year ranged from 3.9 to 5.3 years, taking into account construction delays due to the pandemic, with a median waiting time of 4.1 years.

The authorities have previously said that the median waiting time for BTO projects over the next two years is between four and 4½ years, compared with four to five years during the pandemic.

In the release, HDB also said:

- About 4,900 BTO flats would be launched in August in places such as Ang Mo Kio, Bukit Merah, Choa Chu Kang, Jurong East, Tampines and Woodlands;

- Another 9,500 flats would be launched in November, in areas such as Bukit Batok, Kallang Whampoa, Queenstown, and Yishun.