Bicycle operator oBike ended its Singapore operations unexpectedly in June 2018, after about 18 months of operating here, leaving users wondering if they would get a refund of their deposits.

SINGAPORE - The majority of oBike users have not yet filed claims to retrieve their deposits, the firm's liquidators revealed on Wednesday (Jan 23).

But even for those who have filed claims, there is no timeline yet as to when they can get their money back, as liquidator FTI Consulting continues debt settlement talks with oBike's new majority shareholder.

The bicycle operator ended its Singapore operations unexpectedly last June, after about 18 months of operating here.

Its sudden exit had left users wondering whether they would get a refund of the deposit of up to $49 which they had to make in order to use the bikes. 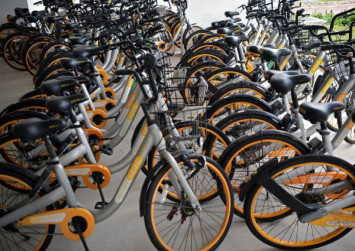 As of Tuesday noon, deposit holders have lodged only $438,878.43 worth of claims, a small percentage of the $8.91 million that the firm registered in its records.

"Quite a lot of deposit holders are yet to file their claims with the liquidators," said FTI's senior managing director Joshua Taylor.

According to oBike's records, it has more than 220,000 deposit holders in Singapore.

The liquidators did not announce a breakdown of the number of people who have already filed for refunds at the meeting with oBike's creditors at Shaw Tower on Wednesday.

About 18 people, made up of both oBike users with unrefunded deposits and companies which are owed money, attended the 42-minute session.

In contrast to the fraction of oBike users who are looking to retrieve their deposit, a much larger proportion of other creditors have already filed claims against the company.

As of Tuesday noon, trade creditors, vendors, regulatory agencies and town councils have filed about $768,700 worth of claims against oBike, a higher number than about $497,700 of outstanding claims stated in the firm's records.

Mr Taylor also revealed that FTI had recovered about $541,000 from oBike through selling its bicycles and recovering funds held by third-party service providers.

Creditors are unlikely to receive a payout from this sum, he said in response to a question from an attendee.

"That is an option, but if you look at it, there's cost and expenses associated with liquidation... so if we did that I don't think there will be a great return at all to creditors," said Mr Taylor.

A lifeline for creditors, however, could come in the form of oBike's new owners, Costa Rican investment group OSS Inversiones.

FTI said it is working with OSS to agree on the proposed terms for the latter to settle outstanding claims against oBike.

He added that FTI had already provided additional information on claims against oBike to OSS, as requested by the group.

But a representative from OSS, Mr Samuel Chaves, told The Straits Times later on Wednesday that it had yet to receive such information.

Mr Gabriel Teo, country manager of logistics company TheLorry.com, said that despite the uncertainty over whether his firm can still receive the money owed to it, the meeting was more positive than the previous one in August.

TheLorry.com has filed a claim of $80,715.50 against oBike for services that it provided.

"Things have moved forward... we are cautiously optimistic," he said.

For former oBike users with unrefunded deposits, they can still file their claims against oBike at www.obikedepositholders.com/