Other taxi companies to follow ComfortDelGro in raising fares

The operators will have to inform commuters about the new fares at least seven days before the adjustments kick in.

Prime Taxi will raise the flag-down fare for its basic taxis by 30 cents from $3.80 to $4.10, with metered charges to increase by two cents to 24 cents for normal taxis and 35 cents for premium ones.

Sources said more details will be available on Monday (Feb 28). The hike is likely to kick in a week later, on March 7.

Trans-Cab on Friday (Feb 25) also said its flag-down fare will go up by 20 cents for its basic Renault Latitude and Toyota Prius taxis, increasing from $3.90 to $4.10, effective  from March 8.

Every 45 seconds of waiting time will also cost passengers 24 cents, up from 22 cents, matching the hike announced by ComfortDelgro.

The Straits Times (ST) has reached out to Strides Taxi, subsidiary of transport operator SMRT, and Premier Taxis for more information on their planned fare hikes.

A driver from Strides Taxi told ST that he has been notified of a flag-down fare increase of 20 cents and a two-cent increase for metered charges - identical to ComfortDelGro's.

This should take effect on either March 9 or 10, he said.

A Public Transport Council (PTC) statement on Friday confirmed what has been anticipated since ComfortDelGro made the announcement earlier this month, with all four taxi operators informing the council of their decision to raise fares.

Under PTC regulations, the operators must inform commuters about the new fares at least seven days before the adjustments kick in.

While PTC does not intervene in setting taxi fares, the requirement is to make sure that prices remain transparent and commuters know the additional charges that may be levied when they hire a taxi.

ComfortDelGro, which controls about 8,900 cabs, or 60 per cent of the fleet here, has said its flag-down fare will rise by 20 cents and metered charges by two cents from March 1.

The last fare adjustment, more than 10 years ago in 2011, saw a similar sequence when smaller operators all raised fares after ComfortDelGro.

Inflation and fuel prices, which have been steadily rising since mid-2020, have hurt cabbies, while ridership remains lower than what it was pre-pandemic.

Russia’s invasion of Ukraine has also had an impact on pump prices here, with four out of five oil companies charging between four and 17 cents more for diesel and petrol after Thursday (Feb 24).

Commuters and observers said the latest move by taxi operators should not put people off taking taxis, since they will continue to compare prices between taxi companies and private hire companies like Grab and Gojek.

Read Also
'An increase is justified': Taxi fares in Singapore poised to rise in March 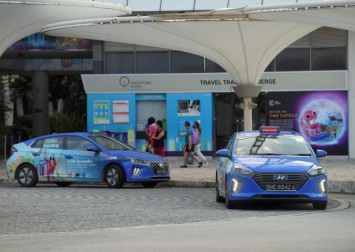 With surge pricing, total fees between hiring a taxi and a private hire car will not be too different.

“The impact will be minimal since some commuters will already have their preferred mode of transport, be it taxis or private hire cars,” said Associate Professor Raymond Ong from the National University of Singapore.

“It depends on whether it is peak or off-peak. Commuters will always compare the various options and this taxi fare increase is unlikely to be that different from the current fare differences between private hire cars and taxis.”

“But in view of price competition with private hire companies, taxis had to settle for this minimum hike,” he said.

“If more people turn to private hire cars, that will cause a surge in prices for them too. Private hire drivers are also feeling the heat from rising costs,” he said.