Hungry otters are out on the prowl again and this time, an elderly man's pet fish have fallen prey to the mammals.

Several otters sneaked into his house along Jalan Tari Payong on Friday (March 11), feasted on his koi and luohan fish and left the headless remains of their meal behind.

The 76-year-old told Shin Min Daily News that he returned home from his morning exercise to see four otters running towards a nearby drain. One of them hid under a car.

"My neighbour told me that they saw an otter with a koi in its mouth jumping out of the gate," he said.

His domestic helper found four to five koi with their heads bitten off lying on the lawn near the pond.

"The otters also ate five koi I had bought last December," he added.

Besides the koi, the otters also devoured the louhan fish that the senior and his wife had reared for 17 years in a smaller pond.

The man suspected that the otters sneaked into the house from the left fence.

He also shared that the mammals ate seven koi at his neighbour's house two weeks ago.

"After that incident, my neighbour placed plastic nets over his pond to prevent the otters from attacking the fish." 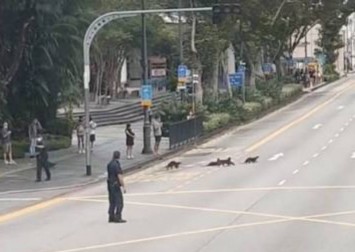 This might have led the otters to seek food elsewhere in the estate, the senior and his wife said.

To prevent the otters from visiting again, the couple plans to seal the gap in the iron gate with a safety net.

Last year, over 100 fish were gobbled up by otters in four days at the Church of St Teresa. Some of the koi had been carefully raised by church staff and gardeners for more than 15 years.