SINGAPORE - The pair were captured on video taking a brief dip in the swimming pool of a condominium in Sentosa Cove.

But the duo were not your typical denizens or tourists of the resort island.

In a video taken by a resident at The Berth by the Cove, two otters were spotted swimming a lap in the condominium's pool on Monday morning (Oct 1).

The duo are then seen climbing out of the pool, before making their way to and frolicking in a pond feature nearby.

Resident Shona Trench, who took the video, told The Straits Times that she had been in the pool with a friend when they spotted the aquatic mammals hopping into the pool.

"I jumped out immediately and grabbed my phone to film them... They eventually clambered out and exited along the path to the front of the condominium. Most people I think are happy to spot them," said the 57-year-old housewife.

The British citizen, who has lived in Singapore for eight years, added that this is the first time she has seen otters at her residence although she has spotted them at places like the Kallang River and Changi before.

Otters came for a swim this morning, Sentosa Cove.

Mr Brian Ladrillo, a concierge officer at the condominium, said that this was not the first time otters had been spotted at the residence.

"The security guards and myself spot them quite frequently, often in the middle of the night at about 1am to 4am," he said.

Mr Kalai Vanan, deputy chief executive of the Animal Concerns Research and Education Society, said that the otters could be crossing the area and potentially looking for food in the water bodies.

A few years ago, the condominium had faced the problem of otters eating the koi fish in its water features, Mr Ladrillo noted. The condominium eventually decided to remove the koi.

ST reported in July 2015 that otters were suspected of having feasted on ornamental koi at a Sentosa resort and Sentosa Cove home in April that year.

Read Also
Scuffle between crocodile and otters captured on video in Sungei Buloh not a rare sight: Nature observers 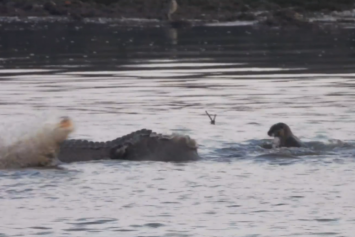 Some netizens commenting on Ms Trench's Tuesday video raised concerns about the chlorine content in the pool water and any possible implications for the health of the otters.

Veteran otter watcher Jeffrey Teo said that while he was not an expert on the possible health impact, otters are "pretty hardy".

"While otters are coastal creatures, they still have to move inland to consume fresh water, which may explain why we are seeing more otters here. They were probably curious about the water body," he said.