At least 12 stalls were affected by a gas supply cut following a fire at the hawker centre at 11 Telok Blangah Crescent on Monday (Feb 11).

SINGAPORE - A fire broke out at a hawker centre in Telok Blangah on Monday morning (Feb 11).

At least 12 stalls were affected after the gas supply was cut as a result, Chinese paper Shin Min Daily News reported.

The Singapore Civil Defence Force (SCDF) said that it responded to the fire at 11 Telok Blangah Crescent at 9.08am.

The fire involved a wok in a hawker stall, the SCDF said. No injuries were reported. 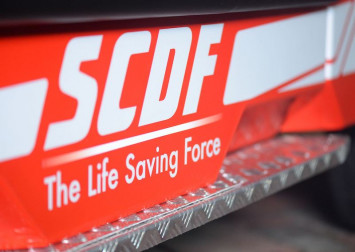 The first firefighter who arrived at the scene observed flames coming from a partially covered wok and tried to extinguish it with water.

However, the flames grew bigger, leading the firefighter to use a dry powder fire extinguisher and a compressed air form backpack to put out the fire.

He was subsequently assisted by arriving SCDF officers.

The SCDF said that besides the wok, the fire also affected a kitchen exhaust duct at the hawker centre.

Shin Min reported that the fire started at a hawker stall which sells fried fish cakes.

The stall owner, Mr Zhang Chuanrong, 35, told Shin Min that he was cleaning up his stall and preparing for Tuesday's business when the fire started.

He had been heating oil when it overheated and the stove did not turn off automatically. Instead, sparks appeared, Mr Zhang said.

The fire grew larger and spread to the exhaust duct above his stall, he added.

His stall had been closed the last few days and there were not much ingredients in the premises, Mr Zhang added, saying that his estimated losses from the fire were not major.

The owner of a fishball noodle stall nearby said that the gas supply was cut off for her unit.

A video of firefighters putting out the fire was posted on social media, showing SCDF officers asking passers-by to keep away from the scene.

The SCDF said that preliminary fire investigation revealed that the fire was due to overheating.