SINGAPORE - Deputy Prime Minister Heng Swee Keat on Friday (April 9) said he and his team in East Coast GRC remain committed to serving their residents in the coming years, and that they would fulfil promises made when they were voted in at the polls last year.

He was speaking to reporters late that evening at the People's Action Party's headquarters in Bedok after a two-hour meeting with activists in his constituency, a day after he announced he was stepping aside as leader of the party's fourth-generation team.

Various meetings among PAP leaders, MPs and activists were organised on Friday to address concerns and questions about the party's succession plans.

Mr Heng said his team told their activists during the hybrid meeting that "nothing has changed".

"We told them, the residents of East Coast have given us a mandate. And we have promised them we will work to build a vibrant, caring and green East Coast," he said.

Read Also
Heng Swee Keat's decision catches many by surprise: What lies ahead for PAP's 4G? 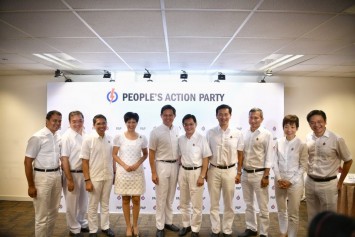 Mr Heng said he also spent some time to explain what he had said at Thursday's press conference to announce his decision to step aside as Singapore's potential next leader - and to reiterate why it was better for the country to have someone younger with a longer runway to take on significant challenges facing it in the years ahead.

Mr Heng, who turns 60 next week, said his activists understood his decision and that some retired MPs had also reached out to communicate the same.

"They understand the need for us to say this, in order to facilitate the changes that will come."

Asked if he would be involved in deliberations to choose the next 4G leader, he said that he would continue to chair meetings to discuss national issues and to provide his inputs.

He said the rest of the 4G team were discussing the matter among themselves and that he would meet them later next week.

Prime Minister Lee Hsien Loong, who will remain at the helm till his successor is ready to take over, has said that he hopes a new leader can be identified before the next general election.

Mr Heng will relinquish his finance portfolio when a Cabinet reshuffle takes place in two weeks, but will remain as Deputy Prime Minister and Coordinating Minister for Economic Policies.

Asked for his ideal candidate to be the next finance minister, Mr Heng said this person should have a very good background in economics, experience in managing a ministry before, and the ability to work with all the other ministers.

"Because every budget requires significant inputs from every ministry, and it is to support the whole-of-government," he said. "We have several suitable candidates, in my mind."