The new award will sit alongside the other awards which are presented by the President for outstanding accomplishments, namely those that are awarded for social causes, innovation and creativity, contributions to society, and youth talent and volunteerism.

Directly addressing Ms Yip, who was in attendance, Mr Tong said: "Pin Xiu, your trophy cabinet must be packed by now but I hope you can find space for one more way for us to honour and recognise you.

"Your innate quality to inspire other Singaporeans, your consistency in sporting achievement at the highest level, your contributions in so many areas away from sport and your quiet, unassuming personality, which hides a deep personal conviction to be a positive change-maker...

''Each amazing in its own right, but taken together, you and your achievements have served to unite us as Singaporeans, and inspire us deeply."

Mr Tong said that he had discussed with his Cabinet colleagues how to appropriately recognise Ms Yip's achievements, and said that a proposal was made to create the new award, which President Halimah Yacob has agreed to.

The award comes on the back of her successes in the women’s S2 50m and 100m backstroke in Tokyo, which also ignited public debate on the disparity in cash rewards for Olympic and Paralympic athletes.

Each win earns her a $200,000 reward, which is one-fifth of the payout for an Olympic gold.

Ms Yip, 29, is most well-known for bringing pride to the Republic through her success on the world stage in para-swimming.

She won Singapore's first Paralympic gold medal at the Beijing Games in 2008, and then followed that up with double-gold feats in Rio de Janeiro in 2016 and at the Tokyo Games in September this year. She also set world records in her two events in Rio, which still stand today.

Mr Tong, however, noted that she has made "extensive contributions" to the nation outside the pool as well.

She served as a Nominated Member of Parliament from 2018 to 2020, when she advocated on issues such as sports and inclusion, and spoke out against campus sexual violence and workplace harassment. 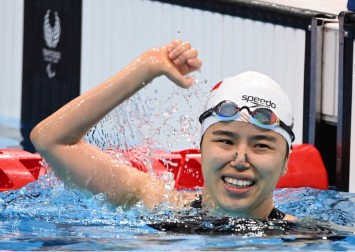 Purple Parade is a national platform to promote awareness and celebrate abilities of persons with disabilities in Singapore.

Highlighting that the new award has a "high qualifying criteria", Mr Tong said: "Pin Xiu has demonstrated these exceptional qualities.

"She has stared adversity in its face and overcome it, time and time again. She is truly an inspiration to Singaporeans, and it is only appropriate that she will now become the inaugural recipient of this award.

"I am certain that she will trailblaze a path for many more to follow in her footsteps and I believe this is what will give Pin Xiu the biggest satisfaction - to see other Singaporeans rise above adversity, take on challenges and be positive change-makers."