The 15 town councils run by the People’s Action Party will not allow users to ride personal mobility devices (PMDs) in void decks and common corridors of Housing Board blocks, Senior Minister of State for Transport Lam Pin Min announced in Parliament on Monday (Aug 5).

This means that they have to dismount and push.

Separately, the Land Transport Authority (LTA) will also start a three-month trial of pedestrian-only zones, where PMD riders will be required to dismount and push their devices at town centres.

This will be tested at four locations: Ang Mo Kio, Bedok, Bukit Batok and Khatib. The same trial will also be done at a neighbourhood centre in Tampines.

Town councils had highlighted the high accident risk in these areas, where paths are lined with shops, Dr Lam said in a ministerial statement.

"As pedestrians can walk in all directions, there is a potentially higher risk of accidents, compared to a linear footpath," he said, adding that MPs will be consulted on the specific details for these areas.

These moves follow a debate in Parliament two months ago on the use of PMDs in such areas, and come as MPs asked further questions on PMD and public safety for Monday's sitting.

The pedestrian-only zones are part of a $50 million initiative to improve the infrastructure in hot spots where such accidents often occur.

The money will also be used to make "appropriate improvements" in these areas, such as widening footpaths, installing clear warning signs, and fixing speed regulating strips on the paths to slow down PMD users, said Dr Lam.

"We will work with local MPs and residents to identify the infrastructure improvements to tackle specific hot spots in each constituency," he added. 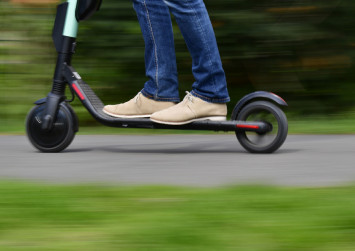 As part of these improvements, a trial of School Zone markings is being introduced to footpaths outside some schools.

"These include speed regulating strips, 'slow' markings and enhanced visual cues on the ground to remind PMD users to slow down and watch out for other path users, especially young children," said the Senior Minister of State.

Such works have been completed at the footpaths outside Fern Green Primary School in Sengkang, and these markings will be expanded to four other schools by next month: Fengshan Primary, Jiemin Primary, Rivervale Primary and Yishun Secondary.