Malaysian Prime Minister Mahathir Mohamad had asked how Singapore as "a rich nation" could pay "such an unreasonable rate" for raw water sold by Malaysia under the water pact when Malaysia was a poorer country by GDP per capita.

The words Dr Mahathir used, as he called for Johor to speak up against the 1962 Water Agreement, were "strong, emotive words, no doubt intended to rouse public opinion", Dr Balakrishnan said in Parliament.

Dr Balakrishnan said the Malaysian PM had asked how Singapore, as "a rich nation", could pay "such an unreasonable rate" for raw water sold by Malaysia under the water pact when Malaysia was a poorer country by GDP (gross domestic product) per capita.

This was "morally wrong", Dr Mahathir had said at the Johor government's retreat with the federal Cabinet in Putrajaya.

The remarks prompted MP Vikram Nair (Sembawang GRC) to raise the issue on Friday (March 1) during the debate on the Foreign Affairs Ministry's budget.

Mr Nair noted, among other things, that Dr Mahathir had said Singapore, as a rich country, "should be more generous".

In reply, Dr Balakrishnan said the 1962 Water Agreement is not about who is richer or poorer but about the fundamental principle of respecting the sanctity of agreements.

"Therefore Malaysia and Singapore must fully honour the terms of the 1962 Water Agreement, including the price of water that's stipulated in it. And our longstanding position has been that neither Malaysia nor Singapore can unilaterally change the terms of this agreement between our two countries," he added.

Reiterating what he told Parliament in July 2018, he said Malaysia has lost its right to review the price of water under the 1962 Water Agreement.

In fact, Malaysia has acknowledged that it chose not to seek a review in 1987 because it benefited from the pricing arrangement under the agreement, he added.

Dr Mahathir, who was Malaysia's prime minister from 1981 to 2003, explained in 2002 that his country did not ask for a review in 1987 as it knew that any revision would also affect the price of treated water sold by Singapore to Malaysia.

Today, Singapore continues to sell treated water to Malaysia in excess of its obligation of five million gallons a day (mgd) under the Water Agreement at Malaysia's request and at a fraction of the cost to Singapore of treating the water, he said.

In fact, Singapore has been selling 16mgd of treated water to Johor, he added. 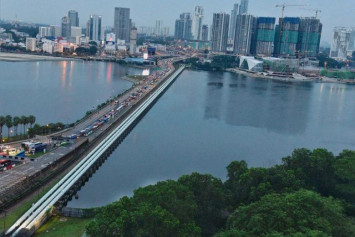 On top of this, PUB from time to time also receives requests to supply additional treated water to Johor.

For example, between Jan 2 and 4, 2019, Singapore supplied a further 6 mgd of treated water, over and above the 16 mgd, when Johor needed more water because its water plants experienced disruption owing to pollution, he added.

Dr Balakrishnan also highlighted the Linggiu Dam and how PUB and Johor signed an agreement in 1990 to build it to increase the yield of the Johor River.

Johor owns the dam, but Singapore paid more than $300 million for its construction and operational costs, as well as compensation for the land used for the Linggiu Reservoir, the potential loss of revenue from logging activities, and as one-time payment of the lease of that land for the remaining tenure of the 1962 water agreement, he said.

"If Malaysia had exercised the right to review the price of water in 1987, Singapore might well have made different investment decisions on developing the Johor River," he said.

Dr Balakrishnan also said Singapore has so far spent more than $1 billion on water projects in Johor to help ensure that not only PUB's waterworks but Johor's own waterworks can reliably draw water from the Johor River.

He pointed out that when the water level of the Linggiu Reservoir dropped to a historic low of 20 per cent in October 2016 because of a drought, water had to be supplied to the downstream water treatment plants.

Dr Balakrishnan said that in periods of dry weather - which Johor is coincidentally experiencing now - Singapore continues to provide Johor with treated water at its request.

"We do so out of goodwill, without prejudice to our legal rights under the water agreement.''

This is why, he said, Prime Minister Lee Hsien Loong proposed to Dr Mahathir in November 2018 that their attorneys-general meet to better understand each other's positions on whether Malaysia still had the right to review the price of water under the current pact.

The attorneys-general met in December 2018, he added. "Unfortunately, their discussions were overshadowed by the Johor Baru Port Limits and the Seletar Instrument Landing System procedures issues that we are now trying to resolve.

"Nevertheless, the two attorneys-general will continue their discussions in due time."

Summing up, he said that since Singapore separated from Malaysia in 1965, it has chosen a "different and unique fundamental philosophy of governance" and taken a different development path.

"Singapore has no natural resources, we're even short of water, but Singaporeans have long internalised that no one owes us a living. We have provided a framework where all our citizens strive to do their best and achieve our potential by dint of our efforts."

Dr Balakrishnan said Singapore takes a zero tolerance policy towards corruption, and the Government plans and invests for the long-term, as exemplified by the 2019 Budget.

"We honour and fulfil our international agreements and commitments. As a result of that, businesses have the confidence to invest and grow in Singapore and... we invest in infrastructure ahead of time."

"I think the answer is obvious."