Parliament: MPs will lose their seat if fined at least $10k

Parliament on Monday (May 9) unanimously approved amendments to the Constitution to update the disqualification criteria for MPs who were convicted and fined.

SINGAPORE - MPs who are convicted and fined for an offence will now lose their seat only if the fine amount is at least $10,000, after Parliament on Monday (May 9) unanimously approved amendments to the Constitution to update the disqualification criteria.

This increase in the fine quantum, from the existing $2,000, takes into account inflation over the years, Education Minister Chan Chun Sing, who is also Minister-in-charge of the Public Service, told the House.

He noted that the quantum has not been reviewed since independence, and $2,000 then would amount to about $8,000 today.

The change also takes into account the sentences handed down by Singapore's courts today for committing serious tax evasion and corruption offences, which are relevant to the integrity of a person, he added.

The fine quantum had come under scrutiny in recent months, after Leader of the Opposition and Workers' Party (WP) chief Pritam Singh and his fellow Aljunied GRC MP Faisal Manap were referred by Parliament to the Public Prosecutor for further investigations over a lying scandal involving former WP MP Raeesah Khan.

In a Facebook post on Feb 10, Mr Singh had brought up the prospect of losing his parliamentary seat if he is fined $2,000 or more, referring to the existing threshold.

Mr Chan did not refer to this on Monday, but said the changes are part of the Elections Department's (ELD) broader review of election processes and legislation undertaken after General Election 2020.

"ELD noted that the MP disqualification criteria has not been revised since independence," he said.

He noted that some other changes the ELD had proposed, such as the possible introduction of postal voting for overseas Singaporeans and special arrangements for voters living in nursing homes, had been discussed in Parliament in March this year. 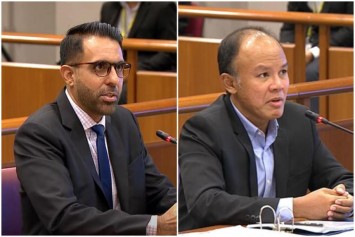 WP chairman Sylvia Lim (Aljunied GRC) described the increase of the fine quantum to $10,000 as "an attempt to retain the same standards of eligibility that existed when the law was originally enacted".

While she said it was a move in the right direction, she questioned if an MP should even be disqualified over a fine.

In Australia and Britain, for instance, candidates at a national election are generally not disqualified if they are merely fined in court, whatever the amount, she noted.

She said fines may sometimes be imposed for infractions which many do not consider criminal in nature, citing a court case in which a member of an opposition party was fined $5,000 for contempt of court. The 2019 case involved Singapore Democratic Party member John Tan.

Ms Lim added that given the multitude of regulatory laws in modern society, there was always a risk that people involved in business or in certain industries may be fined for non-compliance.

Suggesting that future reviews could remove fines as a reason for disqualification, she said the setting of the criteria "affects the fundamental right of citizens to participate in public life, and also the right to continue in office after being duly elected by the people".

She added: "Some may wonder why we need to be so concerned, since the disqualification based on a court sentence lasts for only five years, after which the person can stand for election again.

"While five years is, no doubt, just one election cycle, five years in a person's life is not a short time; nor should we discount how society could lose from the contributions of an otherwise capable citizen banished to the political wilderness, even if temporarily."

Mr Lim Biow Chuan (Mountbatten) and Mr Murali Pillai (Bukit Batok) said deciding on disqualification based on the fine quantum alone may be too blunt a tool.

They suggested specifying the offences that would disqualify someone as an MP, to better signal undesirable behaviour.

Mr Murali noted that some people guilty of dishonesty or moral turpitude, such as those who have committed fraud or sexual crimes, may not be disqualified if they were given fines that do not cross the threshold.

Mr Lim said there may be those who are disqualified just because of minor technical mistakes, such as not noticing a blind spot while driving, if their fines meet the threshold.

"We ought to set a bar in the Constitution that disqualifies a person from being an MP if that person is convicted of any offence that relates to dishonesty, fraud, corruption or bribery or sexual misconduct but not for careless driving," he added.

Mr Murali also suggested that sitting MPs should be held to a higher standard than those who want to run in elections.

He said uniformed officers who have committed offences that gravely violate acceptable standards can be dismissed, irrespective of the sentence.

Responding, Mr Chan said the changes were intentionally kept narrow, in keeping with the democratic idea that a person's right to participate in the political process and to stand for public office should be unfettered as far as possible.

"While we need to ensure fitness of individuals to be parliamentarians, the bar cannot be so high that we undermine our parliamentary system, which is founded on representative democracy," he said.

"Keeping the disqualification criteria to a reasonable threshold also allows voters broad discretion to choose whom they wish to represent them."

He said it was fair that the electorate gets to choose from the widest possible slate of candidates with a minimum level of checks for integrity, and that a person's previous disqualification should reset after a period of five years.

He added that Singapore's practice is no different from that of many other jurisdictions that disqualify MPs based on the fine quantum or jail sentence, as it is inherently challenging to list specific offences and have to frequently amend the Constitution to keep the list updated.

Other changes endorsed included extending the disqualification criterion to cover MPs who are convicted in any foreign country, and removing an outdated clause that excludes disqualification for those who have become citizens of a Commonwealth country or of Ireland.

Mr Chan said prior convictions which meet the new thresholds will apply even if they happened before the date the amendments kick in, as the changes are meant to ensure the fitness of those in office.

He also said that the Constitutional ineligibility covered by the Bill, "simply sets the minimum threshold" for those wanting to run for office and addresses a parliamentarian's "minimum moral aptitude".

Beyond this, political parties must continue to ensure that their candidates are people of integrity who adhere to the highest standards of conduct, he added.

While rules are needed to balance the need for democratic participation with the standards expected from public representatives, these three levers are also important, he added.

"Ultimately, our voters will decide at the ballot box the fitness of the persons seeking to represent them in Parliament."