SINGAPORE - The air and water quality in Singapore have not been affected by recent pollution incidents in Johor's Pasir Gudang town, said Minister for the Environment and Water Resources Masagos Zulkifli in Parliament on Monday (July 8).

The Singapore Civil Defence Force (SCDF) tested the air in the north-east with chemical gas detectors and found no toxic chemicals, he said.

He also added that the "ambient levels of volatile organic compounds (VOCs) in the north-east region were also well within safe limits".

The National Environment Agency (NEA) and the SCDF have also been in constant contact with their Malaysian counterparts over the recent incidents and will continue to monitor the situation and provide updates if there are significant developments, Mr Masagos said.

"Our agencies have put in place precautionary measures to guard against any potential pollution impacts arising from chemical incidents, including those from transboundary sources," he assured the House.

Mr Melvin Yong (Tanjong Pagar GRC) had asked about the impact of the pollution incidents. Workers' Party (WP) chief Pritam Singh (Aljunied GRC) wanted to know, in the light of the chemical spill in Pasir Gudang in March this year, how the air and water quality in Sengkang, Punggol, Pasir Ris and Pulau Ubin compared with other parts of Singapore from 2008 to 2018.

These places are in the north-east region of Singapore and closest to Pasir Gudang. 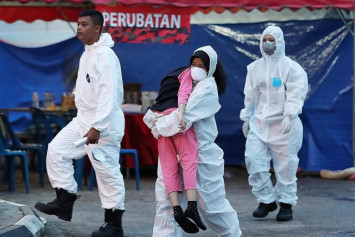 Mr Masagos said the air and water quality in the north-east region were comparable to the rest of Singapore over the 2008 to 2018 period.

Mr Yong also asked if Singapore is discussing with Malaysia the relocating of high-risk chemical factories in Pasir Gudang. Johor chief minister Sahruddin Jamal said on Sunday that the state government was looking into such a move.

Mr Masagos said both the NEA and the SCDF are aware of the types of chemical industries in Pasir Gudang and that their Malaysian counterparts would inform them if and when a move is made.

Mr Singh also asked if the ministry was conducting any studies on the impact of constant low exposure to VOCs, given the large number of homes in north-east Singapore.

Mr Masagos said few such studies are available, adding that many countries do not publish VOC levels because they are usually low.

"Many of us are already, in one form or another, exposed to VOCs on a daily basis on the roads."