SINGAPORE - The issue of high-rise littering stirred up a lively exchange in Parliament on Tuesday (Sept 3), with Ms Lee Bee Wah (Nee Soon GRC) throwing light on a peculiar form of high-rise litter that has been a persistent issue in the past few years: soiled sanitary pads.

Ms Lee, who does monthly litter-picking with residents in her constituency, was among a handful of MPs who expressed concern about enforcement actions taken by the National Environment Agency against high-rise litterbugs.

She pointed out that deploying surveillance cameras for a short period of time hardly addresses the problem.

"There were several high-rise littering of sanitary pads for many years and, until today, it is still not solved. And why? Because NEA deploys CCTV (cameras) only for a few days. And the problem persists," she said.

"Actually, if you have...an ambition to catch the culprit, I'm sure we'll be able to catch (him or her)."

"Otherwise, (it) looks like this problem will disappear only when the litterbug (enters) menopause."

As MPs burst into laughter, Senior Minister of State for the Environment and Water Resources Amy Khor assured the House that "resources are never unlimited", and that "surveillance cameras are deployed where it is possible and where it needs to be done".

She said the number of successful enforcement actions have increased about 120 times since 2011 to more than 1,200 last year, after cameras were deployed in 2012.

But they are "really not the panacea", she added.

"We cannot just depend on enforcement alone. It has to be coupled with community engagement and education." 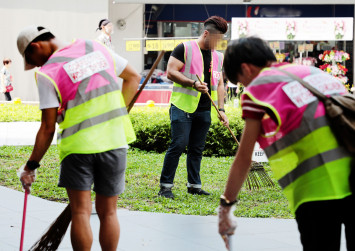 The number of cases plunged from 21 to nine in a six-month period following outreach efforts by various agencies and grassroots organisations, she said.

These included putting up new publicity materials and forming a community watch group to engage residents of the two blocks with litterbugs, she said.

Ms Lee also asked about the possibility of using DNA to nab offenders.

Dr Khor replied: "First of all, when the litter comes down onto the ground, it's likely that it's not the DNA of the culprit alone that will be there. So it'd be very difficult, at least as far as we know of the technology involved.

"I'm not referring specifically to sanitary pads. In general, there will be many other DNA involved."

Mr Liang Eng Hwa (Holland-Bukit Timah GRC) cited a recent high-rise litter incident in which the police arrested the offender within 10 days after a wine bottle he had thrown from the seventh storey of a condominium caused the death of a 73-year-old man on the fifth floor.

In comparison, Dr Khor said it takes between 10 weeks and six months for most cases, from the time the report is made to NEA to the time of prosecution.

Mr Liang asked if NEA had the resources to increase the efficacy and urgency to deal with similar high-rise litter offences.

Dr Khor said that while prompt action is necessary, there is also a need to ensure "investigations are thorough and accurate so that we do not wrongfully prosecute a person".

She added that the agency handles about 26,000 reports of littering every year.

"With such a large volume of cases and the fact that resources are not unlimited, we will have to prioritise. So, we do prioritise based on the severity of the littering offence, the type of litter and so on to take action and investigate."