The police said that they responded to a complaint from a member of the public at 11.30am on Saturday about a man who was asking the public for money at 1 Geylang Serai.

The Straits Times understands that the man was Mr Zeng Guoyan, also known as the "Parrot Man".

When police officers engaged the man, he allegedly became uncooperative and refused to comply with officers' instructions despite repeated warnings.

The police said that during the arrest, he turned violent and hurt two officers. 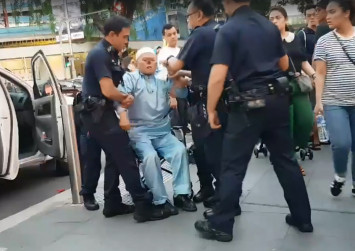 Preliminary investigations showed that over the past few weeks, the police received similar complaints from the public against him for disrupting the peace and causing public nuisance.

Mr Zeng was arrested earlier this year in August after he allegedly verbally abused a man in Orchard Road.

In 2008, he was given the nickname "Parrot Man" after blaming his pet parrot for getting him arrested and charged with using abusive language on two police officers. At the time, he was fined $2,500.

Mr Zeng, who was diagnosed with nose cancer in 2014, made unsuccessful bids to contest the 2011 general election and presidential election, as well as the Hougang and Punggol East by-elections in 2012 and 2013 respectively.