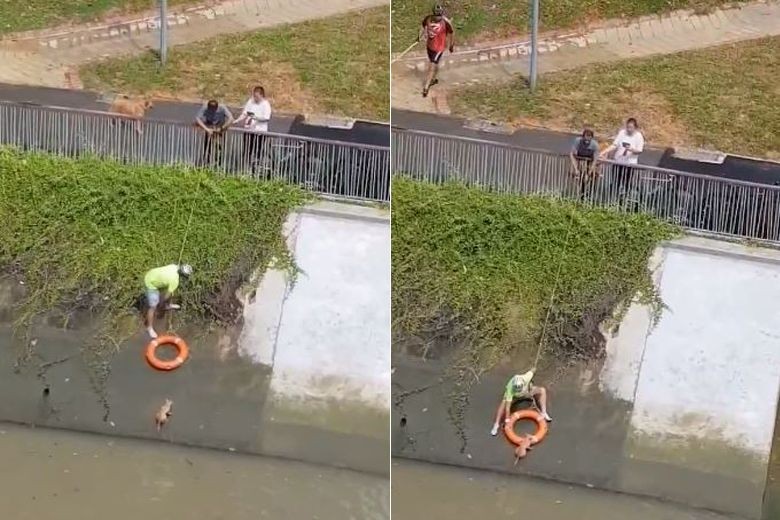 SINGAPORE - A cat was rescued from a near drowning at a Pasir Ris canal on Sunday (Sept 2), thanks to passers-by and an alert Housing Board (HDB) resident who first spotted the feline in trouble.

A video of the rescue was uploaded by the Pasir Ris Street 11 resident, Ms Juwita Abdul Kadir, on the Facebook page of citizen journalism website Stomp on Monday morning.

In the clip, three passers-by are seen helping to haul in the cat from the rushing current.

After about a minute of coaxing, the cat clambered onto the buoy and made its way safely up from the canal.

"Thank you, he saved the cat!" Ms Juwita is heard saying in the clip as the cat is rescued.

The customer service officer, 35, first spotted the cat in trouble at about 11am on Sunday while cleaning her room's window ledge.

"I saw it struggling in the water while its paw was holding on to a pipe opening," said the mother of three, who said she could not go down herself, as her young children were at home.

"I screamed for about one to two minutes for passers-by to help and even waved my pink towel for attention," said Ms Juwita, who owns two pet cats herself.

She was glad the cat was finally saved, and said of the good Samaritans: "I wish I could get in touch with them."