Children having lunch at PCF Sparkletots pre-school centre in Sengkang, on April 5, 2019.

SINGAPORE - The PAP Community Foundation (PCF) is looking for new cooks to join its pre-schools, as it puts a stop to catering services in the wake of a recent outbreak of food poisoning across several centres.

Chief executive Victor Bay said PCF is also open to reviewing its pay and benefit packages for cooks. More administrative staff who have completed Basic Food Hygiene courses conducted by training providers accredited by the National Environment Agency (NEA) will also be redeployed to help in the kitchen.

Since Monday (April 1), 15 of the 16 affected pre-schools, mainly in Sengkang and Punggol, have switched back to using in-house cooks.

In an update on Thursday, PCF said it is also exploring plans for the last centre at Punggol North - which has more than 400 children - to build kitchen facilities for in-house cooks to prepare food.

Another three centres - which were using a different caterer - have also gone back to in-house cooks.

The first cases of food poisoning were reported on March 21.

By Thursday, 239 children and 12 staff from 13 PCF Sparkletots pre-school centres reported symptoms linked to food poisoning, with 31 of them hospitalised. Forty of the 239 cases had been diagnosed as food poisoning.

All children have been discharged from hospital and 90 per cent of the reported cases have returned to school.

There have been no new cases since Tuesday.

The outbreak was traced to the consumption of food prepared by Kate's Catering, which PCF has since stopped using.

Before this incident, 35 of PCF's 356 centres used catering services, after it conducted a pilot to hire external caterers in January last year. Currently, 17 centres are still using catering services. 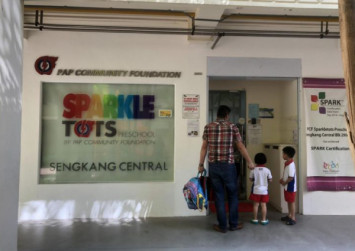 In the last three decades of operations, PCF has not experienced an outbreak of food poisoning on such a scale, she said, adding that any incident would have been contained within individual centres.

Ms Khamis said that it has been increasingly difficult to find competent cooks in recent years, and the 35 centres which had opted for caterers had experienced high turnover rates of their cooks.

This could be because the centres were largely in new towns like Sengkang and Punggol, which have a younger population demographic who may not be inclined to being cooks.

"When in-house cooks resign, our pre-schools must find replacements quickly to ensure continued supply of food for our children," she said.

It can also be a challenge for cooks to keep up with the demands of the job today, which includes taking into account children's food allergies and having an understanding of nutrition.

Despite these difficulties, PCF - Singapore's biggest pre-school - will be transiting back to relying on in-house cooks.

The outbreak is still under investigation by the Health Ministry, the Early Childhood Development Agency and the NEA.