People should wear a mask when going to the market or they will be turned away, says NEA

The National Environment Agency said those who do not wear masks will be turned away.

People should wear a mask when shopping at any market, the National Environment Agency (NEA) has said.

From Sunday (April 12), those who do not will be turned away at the 40 markets managed by the NEA or NEA-appointed operators.

NEA said that the generally crowded and closed-in environment in markets, as well as the continued crowding observed at the start of the long weekend on Friday, have led it to make the move.

Reusable masks have been made available to all residents since April 5, and people can still collect them at community clubs and residents' committee centres across the island until Sunday.

The latest update is in addition to the crowd management measures, such as controlled entry and exit points, that the NEA has already put in place. NTUC Fairprice had earlier urged all its shoppers to wear masks during their grocery runs and has stipulated that all its staff must wear masks when working.

On Friday, more than 2,900 stern warnings and 40 $300 fines were issued to people who flouted safe distancing measures across the island, as the authorities noted an increase in the number of people out and about on Good Friday, a public holiday.

In more than 20 cases, the police were also called in as people were not cooperative despite repeated instructions to leave clustered areas. The Ministry of the Environment and Water Resources (MEWR) repeated its warning that failure to comply with circuit breaker measures will be met with firm action.

People should also not go on family outings during this period, or they could risk being issued a stern written warning for the first offence, a $300 fine for the second, and prosecution in court in the third. 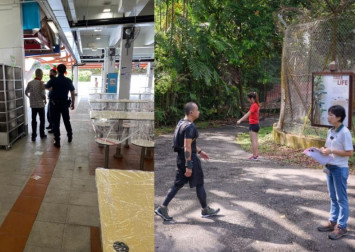 The National Parks Board (NParks) on Friday had to temporarily close access bridges at Sungei Buloh Wetland Reserve and Bishan-Ang Mo Kio Park, as well as the Henderson Waves and MacRitchie TreeTop Walk after crowds in these recreational spots surged.

It said it issued more than 90 stern warnings and fines to those who who were gathered in groups or who entered areas that had been closed in parks managed by it and Town Councils.

The Singapore Food Agency also issued a $1,000 fine to an operator who was illegally selling face masks at Ang Mo Kio Avenue 1 on Friday, while the police are investigating a beauty salon in Upper Cross Street that was found to have provided massage services without a license during the circuit breaker period.

The number of Covid-19 cases in Singapore crossed 2,000 as of Friday noon, reaching 2,108 cases. A seventh person has died.