SINGAPORE - The People's Association's (PA) chief executive director Desmond Tan Kok Ming will step down and leave the public service on June 15, fuelling speculation that he could enter politics at the upcoming general election.

The PA statement gave no indication of Mr Tan's next move after he leaves the public service. He rose to the rank of brigadier-general in the Singapore Armed Forces and was appointed to lead the PA in January 2017.

When contacted, Mr Tan told The Straits Times that his stepping down is part of the leadership renewal in PA.

"I have some plans in mind and (these) will firm up in time. I also hope to continue to serve the community in other capacities. In the meantime, I will be spending more time with my family," he said in an e-mail.

In his reply, he did not address a question posed to him on whether he would be entering politics.

Read Also
Singapore could go to the polls in early July 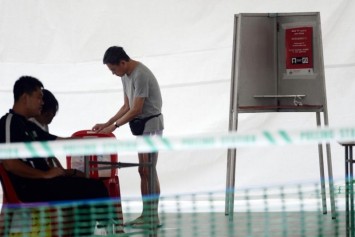 Grassroots sources suggest that Mr Tan could be fielded as a candidate for the ruling People's Action Party in the upcoming election.

Mr Tan has, in recent weeks, been highlighted in Facebook posts on grassroots matters by Senior Minister Teo Chee Hean, who is the anchor minister for Pasir Ris-Punggol GRC.

Mr Teo had tagged him in a May 31 post, for instance, after a discussion with 150 activists from Punggol.

The association also launched initiatives such as ImPAct @ Hong Lim Green, a fitness and social space in the Central Business District.

Mr Tan, the PA added, helped to promote collaboration between the association and other groups, and led its efforts to support the community during the Covid-19 crisis - including mask distribution exercises and the Temporary Relief Fund application at Community Clubs (CCs) and Residents' Committees (RCs).

His successor, Mr Lim is a retired Brigadier-General who joined the PA in 2016.

"Under his leadership, PA has strengthened its engagement with Singaporeans, and helped the Government to better understand and address their needs, concerns and aspirations," he said. "I would also like to welcome Mr Lim in his new role, and wish him the best."