SINGAPORE - A freelance photographer who was walking his dog stumbled upon "human-like" bones near his Braddell home on Monday (July 29).

Curious about what type of bones they are, Mr Alan Lim took a photo of the pieces on the grass patch and posted it on Facebook that afternoon.

The 45-year-old freelance photographer, whose Facebook post has since been shared widely online, also called the police.

The police said they were alerted to the bones in Sommerville Walk at about 9am.

The origin of the bones is not yet known, and the police added they are looking into the matter.

Speaking to The Straits Times on Tuesday, Mr Lim said he had also taken his 6-month-old dog, a whippet, out for a walk the night before in the area just next to his condominium.

"It was quite dark and I remember stepping on something that rattled, and didn't sound like a rock," he added. "That left a bit of impression on me."

I discovered some “human-like” bones in my neighborhood as I was walking my dog. I called the cops, they came right away...

Mr Lim, who also teaches photography, said that he took a closer look at the spot the next morning and was intrigued to see the bones.

He added that the bones were "pretty big and chunky" and did not look like it belonged to a small animal.

A bone specialist was called in to examine the bone pieces, he added, and the area was cordoned off for about two hours. 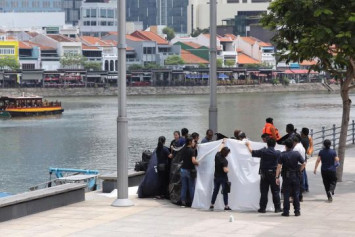 He also noticed a dog from the police's K9-unit sniffing the area.

However, the discovery was not shocking for Mr Lim, who said that he was more eager to find out what it was.

Some Facebook users have left comments speculating that the bones could be from soup tulang, or bone marrow soup.

Mr Lim told ST: "What are the odds of finding something like this? I just hope to find out what it is."