‘This place is where many of us seek comfort’: Bukit Batok residents emotional after being told to clear carpark rooftop garden

Madam Fan Nyook Ying with some of her plants at the carpark rooftop garden.

For as long as they have been living there, the top two levels of the eight-storey carpark have always been empty.

Little by little, starting in 2004, residents from blocks 383 to 395 at Bukit Batok West Avenue 5 have worked diligently to turn the top level of the carpark at Block 395A into a garden oasis.

Over the years, plants were laid out in strategic locations, and the residents, mostly senior citizens, started to gather in the open-air carpark to tend to them, admire the blossoming flowers, socialise with each other and even do taiji together.

Now that could all come to an end after the Housing Board (HDB) put up notices at various locations - on walls, lamp posts, poles and flower pots - asking that the carpark be cleared by Sept 12.

Madam Shirley Cheng has been living in the area for more than 10 years, and she was surprised to see a notice pasted on a pole at the carpark on Monday (Aug 23) when she made her daily trip to water the plants.

The retired production operator has been planting and tending to her flowers at the rooftop garden for over six years, and this is the first time she has seen such a notice.

Speaking to The New Paper yesterday, Madam Cheng, 67, said: "I know this is not our property, but we see this garden as our second home, and it is just so sad that they have asked us to clear our items."

In response to queries, the HDB referred TNP to the notice it had put up in the vicinity on Monday.

The notice states that the objects, including flower pots and planter boxes, are "illegally placed" and that "illegal planting activities" are being carried out at the carpark.

It goes on to say that the items have to be cleared by Sept 12.

"Failing which, all objects, including but not limited to plants, that are left behind will be deemed unwanted.

"They shall be disposed of without further notice given," the HDB notice concludes. 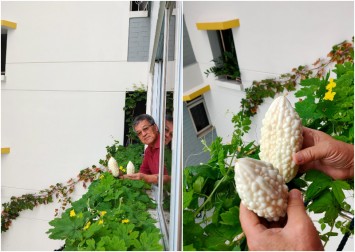 TNP understands that the notices were put up after some residents shared their concerns of mosquito breeding.

When TNP arrived at the carpark yesterday afternoon, retired coffee shop worker Chng Rui Feng, 70, was collecting signatures for a petition to keep the rooftop garden.

His target was 50 signatures, and as of yesterday evening, he had 52 supporting the petition, which he said he would send to the authorities today.

TNP understands that residents can submit requests to grassroots leaders for a community garden to be set up.

Mr Chng, who started contributing plants for the carpark garden more than a year ago, said: "Many of the elderly folk who frequently come here are retired.

"Instead of staying at home all day, we prefer to tend to the garden, use the space to exercise and practice taiji. It has become a community."

He said notices were put up early last year to remind residents to remove bottles in the area and empty the water from the flower pot plates.

The rooftop garden took root 17 years ago, according to some of the residents.

Realising that no vehicles ever used the top two levels of the eighth-storey carpark, a small group started taking plants to the open-air location and began tending to them there.

Some estimate that over the years, residents have contributed more than 2,000 pots and planter boxes of either vegetables or flowers, many of which have bloomed. Today, the plants and flowers ring the entire perimeter of the carpark.

While he understands the HDB has the right to clear the area, a 70-year-old retiree who wanted to be known only as Mr Tan hopes the garden can stay.

Mr Tan, who uses the spot to unwind, said: "While I do not have any plants at the rooftop, it is a good place to relax. Before Covid-19, there would always be so many children playing up here too."

Madam Fan Nyook Ying, 82, started buying plants for the carpark garden since she retired in 2009. She said she got emotional when she saw the notice on Monday. 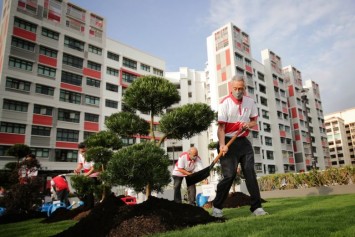 "This place is special to me because I have grown so many plants here over the past 12 years.

"I even have a section just for vegetables that I use when I cook," she said, gesturing to her bittergourd and mint plants.

Madam Cheng, who became friends with Madam Fan over their love of gardening, added: "To us, this place is not just a garden.

"Residents come here to exercise, talk to one another and get some fresh air. In fact, when my grandson was a toddler, I would bring him here to look at flowers and play."

While Madam Cheng accepts that turning the rooftop into a garden is illegal, she hopes the petition will not be ignored.

She said: "This place is where many of us seek comfort. We have grown many flowers and made many friends here. It would be a pity to let that go."