PM Lee may have to stay for another general election: Jayakumar

PHOTO: Ministry of Communication and Information

SINGAPORE - If Singapore is still suffering from the fallout of the Covid-19 pandemic in four to five years' time, will Prime Minister Lee Hsien Loong have to remain longer at the helm, and revisit his earlier intention not to lead the ruling People's Action Party (PAP) into the next general election?

This is a question posed by former senior minister S. Jayakumar in his new book, Governing: A Singapore Perspective, launched on Friday (Nov 6).

In it, he wrote that after the onset of the pandemic and GE2020, the views that PM Lee should remain longer at the helm have intensified despite Mr Lee stating that he hoped to step down by the time he turned 70, which would be in February 2022.

Much depends on how long the Covid-19 crisis takes to abate, he said.

"Of course, if 'normalcy' has been restored before the next GE, I think the public will support his desire to step down as PM.

"However, if the crisis persists, I believe many Singaporeans will want him to reconsider that aspect of his timeline as well, and hand over only after Singapore has turned the dangerous corner."

"It is still early days, but that scenario has to be considered," Prof Jayakumar added.

"Much will depend on the success of measures taken to address both the health and economic fronts."

Given the unprecedented nature of the Covid-19 pandemic, now may not be the right time to talk of leadership succession, said Professor Jayakumar.

Singapore is in a "very perilous and very dangerous situation in our history as a country", he told reporters at the Ministry of Foreign Affairs last Friday (Oct 30) when they interviewed him about his new book. 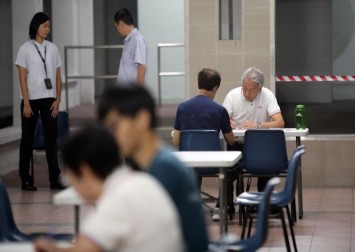 "We've had many other crises before, but this is a particularly difficult one.

"I don't think this is the time, really, to talk of succession," he added.

In a major speech on July 6 this year, PM Lee said he had not expected to encounter such "an overwhelming crisis" in the last stretch of his premiership.

He also said he will see this through with his older colleagues such as Senior Ministers Teo Chee Hean and Tharman Shanmugaratnam, and the 4G ministers, so as to hand over Singapore intact and in good working order to the next team.

Prof Jayakumar wrote in the book that he is glad Mr Lee has given himself some flexibility on the succession timeline:

"In my view, however capable the 4G leaders, we should not change horses in mid-stream."

When asked if a shift in timeline will affect a smooth transition to the 4G leadership, Prof Jayakumar said:

"I've not spoken to the 4G, I do not know their views, but I'm quite sure that they will be guided by the main consideration of what is best in Singapore's interests. I'm confident of that.

"We'll have to see how events unfold."

Led by Deputy Prime Minister Heng Swee Keat, the 4G leaders are the next generation of ministers that will helm the Government when PM Lee steps down.

In the book, he wrote that the Prime Minister's indication that he will see the Covid-19 crisis through, gives a valuable opportunity for the younger 4G ministers - and newly-elected MPs who were also made office-holders - to learn from PM Lee and the more senior ministers. 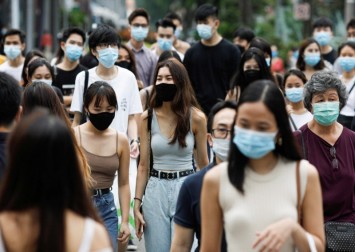 He likened this to the way he and his generation of ministers had learnt from pioneer leaders such as Mr Lee Kuan Yew, Mr S. Rajaratnam and Dr Goh Keng Swee.

He observed that the 4G leaders have shown a steady hand under difficult circumstances.

They have been transparent in setting out the facts in their regular television briefings, and confident in making and explaining decisions as the coronavirus outbreak progressed, he said.

Despite criticisms that they were mishandling the crisis owing to an earlier spike in infection numbers, the 4G leaders have done a "creditable job", he added.

"I was worried as to whether they would be flustered by this criticism, and was very cheered when I saw that they were unfazed.

"They went about their tasks in a very determined manner."

A more formidable challenge, he said in his book, is winning the hearts and minds of younger Singaporeans.

This is because they have needs that are more emotional and experiential, they want their voices heard and they want to play a part.

Read Also
GE2020: '4G PAP leadership leaves more to be desired. It must be checked by a constructive opposition,' says WP 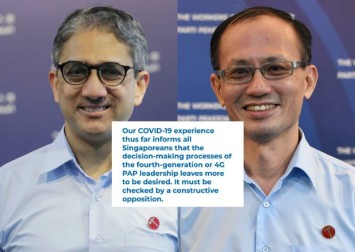 He disagreed with those who say that the young are "soft", are by default rebellious and counter-establishment, and likely to vote against the PAP.

"I do not think this is necessarily true," he wrote, adding that if the 4G leaders demonstrate good leadership and the ability to govern well through a crisis, the younger generation would respect them and look up to them.

Governing: A Singapore Perspective is published by The Straits Times Press and is available at leading bookstores at $35 (inclusive of GST) .

The book can also be ordered from The Straits Times Press Online Bookstore from Nov 7.