SINGAPORE - Prime Minister Lee Hsien Loong is seeking damages in the region of $150,000 from blogger Leong Sze Hian over a libellous article he shared on Facebook, with the Prime Minister's lawyer arguing on Monday (Nov 30) that Mr Leong had not only made "stunning allegations", but had cynically politicised the case and recast PM Lee's effort to vindicate himself as victimisation.

But Mr Leong's lawyer said his client was singled out as he was a prominent critic of the Government, adding that PM Lee had used the "full weight of the government machinery" to come down on Mr Leong in an act of abuse.

He insisted that PM Lee did not suffer any damage to his reputation, and deserved at most only derisory damages of $1 per person who saw the post.

The two lawyers were making their closing submissions before High Court Judge Aedit Abdullah in the defamation suit against Mr Leong.

On Nov 7, 2018, Mr Leong had shared an article on Facebook titled “Lee Hsien Loong becomes 1MDB’s key investigation target”, which said PM Lee was “corrupted” and had signed deals with his former Malaysian counterpart Najib Razak that were unfavourable to Malaysia “in exchange for Singapore banks’ assistance in money-laundering 1MDB’s billions”.

Senior Counsel Davinder Singh, representing PM Lee, said it was hard to think of any other allegation more serious than alleging that PM Lee was part of a global scam.

He noted that blogger Roy Ngerng was ordered to pay $150,000 to PM Lee over a blog post alleging misappropriation of Central Provident Fund monies in 2015, adding that Mr Leong’s allegations were more serious. 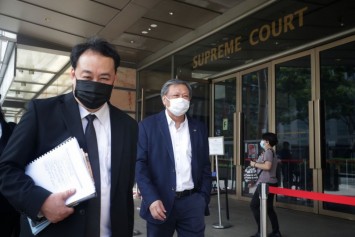 However, Mr Lim Tean, representing Mr Leong, said PM Lee had not gone after The Coverage website, which was the source of the article, and anyone else who had also shared it, adding that PM Lee had sued to silence Mr Leong ahead of the general election.

He said that if PM Lee were to be awarded damages, “a dollar is not out of the question”.

Based on the testimony of an expert who estimated that at least 200 to 400 people would have seen the article, it would mean $400 at most, the lawyer said.

Responding, Mr Singh said that Mr Lim’s numbers reflect Mr Leong’s “determination to humiliate (PM Lee) for doing no more than coming to court to exercise his legal rights and vindicate his reputation”.

He added that Mr Leong had also shown malice by using all avenues to recast the issue as victimisation, and using the court as a platform to not just attack PM Lee, but also politicise the case by accusing the Prime Minister of doing so instead.

“When one not just turns the knife but uses it to advantage and, in that process, draws attention to the libel and also attracts unhappiness or absence of sympathy for (PM Lee) who is merely exercising his legal rights, that is relevant conduct,” said Mr Singh adding that this was an aggravating factor.

He said PM Lee had to sue to vindicate himself, and had taken the stand to be cross-examined so that the court, an independent, impartial tribunal, can decide on the veracity of the allegations.

To this, Mr Lim said there was no justification for these claims, adding that they were “routine” in PM Lee’s defamation suits.

Among other arguments, Mr Lim also said that current defamation laws are not tailored for the social media age, adding that Mr Leong’s actions were merely akin to passing to a friend a newspaper containing a defamatory article.

Giving the example that 9,000 people had shared the article, he said PM Lee could not possibly sue all 9,000 of them: “Very often they come across something interesting and they want to share it, are we to say then that each of them is potentially liable to a defamation lawsuit?”

But Mr Singh said that with social media, it has become easier for people to cause hurt and damage to others as defamatory content could be shared without much effort, and thus greater caution should be exercised.

“Therefore, if anything, Your Honour, far from drawing boundaries around the law as it applies to social media and Facebook, in particular, Your Honour’s judgment should remind people that they cannot hurt others just because they are on social media and on Facebook, and that the laws apply to them equally,” he added.