PM: School lawyers of tomorrow in many fields 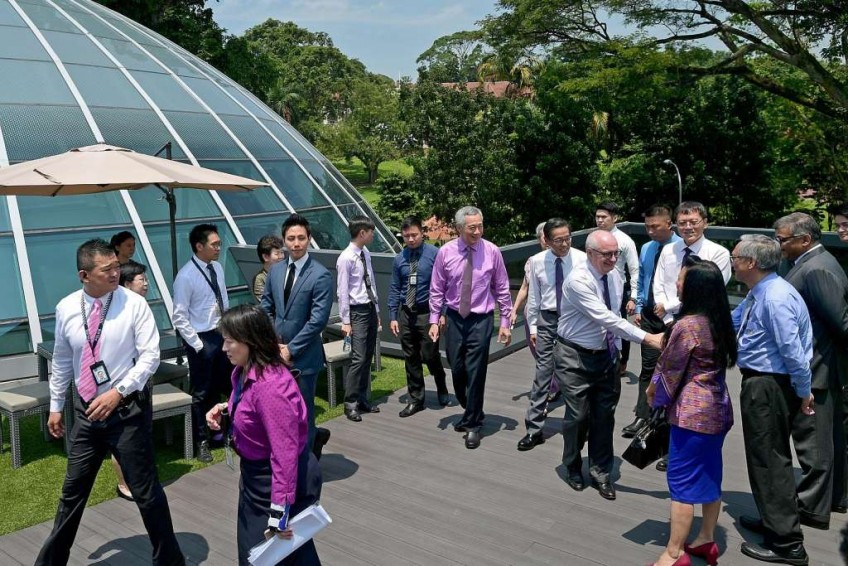 Speaking at the official opening of the Singapore Management University's (SMU) new law school building, Mr Lee said the way law is being practised will change in the future, and more cross-disciplinary learning should be encouraged.

He said the Government will be supporting the bigger law firms to venture into new areas of legal practice while helping the smaller ones raise their productivity and deliver better services to clients.

Mr Lee said the SMU School of Law, Singapore's second law school, was set up in 2007 not just to increase the number of law graduates. "We wanted a law school that would provide a rigorous legal education, coupled with exposure to other disciplines, such as business, economics, accountancy, social sciences or information systems."

He added: "We hoped that the graduates will be more versatile, able to apply their knowledge of the law in many different fields, and to contribute to our economy."

He was speaking to some 800 guests at the school's function hall, where future convocation and commencement ceremonies can now be held in-house for up to 1,400 people.

Mr Lee later toured the new 23,000 sq m School of Law building, located at the junction of Armenian Street and Stamford Road. The building was completed last December at a cost of $165 million.

The building features the Kwa Geok Choo Law Library. Madam Kwa, a lawyer, was one of the founders of Lee & Lee, one of Singapore's oldest firms. Madam Kwa, who died in 2010, is PM Lee's mother.

SMU chairman Ho Kwon Ping, in his speech, said the 2,200 sq m Kwa Geok Choo Law Library will be "at the heart of legal education and scholarship in Singapore".

He added: "Universities around the world are known for their iconic libraries, and this one is strategically placed at the high point of the site next to Stamford Green."

The three-storey library, which can seat more than 500 people, will focus on developing special collections in commercial law, dispute resolution and Asean law, among other areas.

Said third-year law student Shriram Jayakumar, 24: "Now with the proper infrastructure in place, more students will be motivated to go further, knowing that the school is behind us."

Mr Jayakumar is part of a five-man team from SMU which will be representing Singapore at the Philip C. Jessup International Law Moot Court Competition in Washington next month.

In addition, a new pro bono centre in the law school will allow legal clinics conducted by volunteer lawyers and assisted by SMU law undergraduates to be held weekly.

• Unique dome-shaped design, with a seating capacity of more than 500

• Able to hold 50,000 print volumes, including books and law journals

Cost of the SMU School of Law building.