The smoke bomb is a double-edged sword. It has to be handled with care. It can hurt the thrower or help him.

Lee Hsien Yang has thrown one and we will have to wait and see if it hurts him/his political party. His highly-publicised visit to the Tiong Bahru market with veteran politician and secretary-general of the Progress Singapore Party (PSP), Tan Cheng Bock, on Wednesday had raised many people's expectations sky high that Lee, the younger brother of Lee Hsien Loong and second son of Lee Kuan Yew, would fight GE2020.

That was not to be; it was to tell Singaporeans that Lee Hsien Yang had joined Dr Tan's PSP.

Two days later, Dr Tan announced the final list of his party's candidates and Lee's name was not on it. I could almost hear a collective sigh of exasperation. Pff.

Worse still, it came just a day after the uncle of Opposition politics, Low Thia Khiang, and two of his Workers' Party colleagues said they were out of the election race. That announcement left a glaring vacuum in Opposition politics which many thought Lee could fill.

Lee and Dr Tan seemed to enjoy their trick-and-treat strategy, which must have been intended to confuse his rivals in the ruling party. It is not unusual to keep your cards close to your chest to surprise your enemy.

Stoke the fire and create too much smoke and the strategy might just backfire.

Both Lee and Dr Tan seemed to enjoy this guessing game. This is how Lee answered a question on his possible entry as a candidate: "When I am ready to disclose... you will find out."

And Dr Tan said: "I am not confirming... Don't worry. In politics, we know when to make our move. Timing is important."

That time came and went when the final list of Dr Tan's candidates was revealed today.

Well, there is one more opportunity to pull the rug under his opponents' feet — on Nomination Day on Tuesday. Will the Lee bombshell be thrown then?

Read Also
PN Balji: The Opposition party to watch in GE2020 is not WP 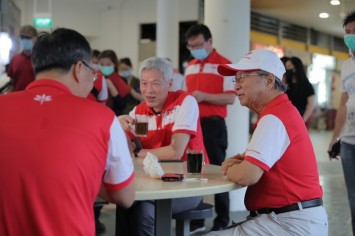 I have my doubts. Generally speaking, Singaporeans don't like family squabbles to spill out into the open. And the Lee family is no ordinary family.

The Lees should settle it within the four walls of the family home, one young voter told me. No point bringing it out into the open, he said.

As though on cue and to appease the views of this young friend and others who might have similar thoughts, Lee Hsien Yang appeared a few hours after his appearance at the hawker centre to explain his decision.

"PAP (People's Action Party) has lost its way." And he said his brother's PAP is very different from his father's.

Also, Lee doesn't seem to be cut out for politics. A source said: "He is very smart. And he suffers no fools. He feels very out of place in front of ordinary people. He will find it very difficult to sit down with ah bengs and ah mas and have an inconsequential conversation with them."

He will be of better use to the PSP if he supports the party from behind and appears at strategic times during the election campaign.

If there is a takeaway from this turn of events, it is this: Keeping your cards close to your chest is fine, like the way Low did when he surprised nearly everyone by walking out of Hougang and going into Aljunied during the 2011 election.

It was all to do with timing — Low had a perfect sensing of the ground which was very upset with the government over immigration issues.

We all know what happened then. Low and his team performed a giant-killing feat by winning a GRC and packing off two ministers and a senior minister of state.

Are Tan, and to a certain extent Lee, getting their timing correct?