SINGAPORE - The police have impounded the passport of a Hong Kong restaurant owner as they investigate him for allegedly organising a gathering here for people to air their views on the protests in the city.

The police said on Wednesday (Nov 6) that they were alerted last month, on Oct 11, to an incident involving Hong Kong resident Alex Yeung.

"The event was initially held at Kimoto Gastro Bar located at The Sail @ Marina Bay, and after some time, shifted to the public area in the vicinity of The Promontory at Marina Boulevard," the police said in response to media queries.

"Currently, (Mr) Yeung's passport has been impounded while he is assisting the police with ongoing investigations," the police said, adding: "He is, however, neither arrested nor in police custody, and is free to go about his activities within Singapore.

"The police would like to remind the public that organising or participating in a public assembly without a police permit in Singapore is illegal and constitutes an offence under the Public Order Act.

"The police will not grant any permit for assemblies that advocate political causes of other countries. Foreigners visiting or living in Singapore should abide by our laws." 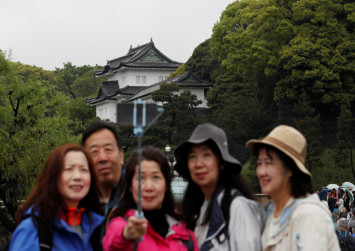 Mr Yeung, who is the founder of the Wah Kee chain of restaurants, is known for his pro-China views.

He said in a video posted on YouTube on Monday that he visited Singapore on Oct 10 to explore the possibility of setting up shop in Singapore and living here, as it is difficult to do business in Hong Kong now.

He said he had planned to stay here for three days, until Oct 12.

"I have never thought of doing anything illegal in Singapore... I have never been a political person. I'm a businessman," he said in the video, which has been viewed more than 185,000 times.

He met some of his fans at the bar on Oct 11 and they asked if they could take photos with him. "I wanted to go back to my hotel to sleep but I stayed out of politeness," he said.

In a video of the gathering that is circulating on social media, Mr Yeung is seen speaking to a group of at least 10 people.

The meeting continued until about 10pm, before he decided to leave and was followed by some of the fans, Lianhe Zaobao reported.

In his video, Mr Yeung said that he spends four to five hours visiting parks in Singapore every day over the past month.

Through his lawyer Nicholas Narayanan, Mr Yeung said that he is unable to comment on what happened on Oct 11 because of the ongoing police investigation and he is cooperating fully with the police.

When contacted on Thursday, staff from Kimoto Gastro Bar declined to comment on the gathering.