Port Dickson accident: Couple will never get to see unborn grandson due this month

Madam Maimunah Sapari, 51, and Mr Rosli Samad, 54, were to become grandparents with their first grandson due in January 2018 --- before an accident at Port Dickson killed them.

A runaway tipper truck had sped through a T-junction in Jalan Lukut Sepang on Wednesday (Jan 3) at 2.30pm, ploughed through a Honda Stream which the Singaporean family of four were travelling on.

The accident involved five vehicles - The Singapore register Honda Stream and tipper truck, as well as a Mercedes-Benz SUV, Perodua Myvi and motorcycle. 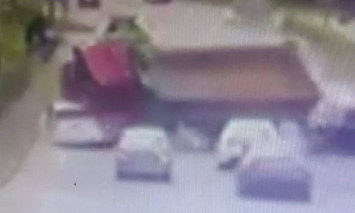 The passengers on the Honda, Madam Maimunah, Ms Nur Amalina Rosli, 21, and Ms Dayana Sarah Rosli, 18, died at the scene, while Mr Rosli, died while being conveyed to Seremban Hospital.

A family member told Shin Min Daily News that the family had set off at dawn.

They drove to Kuala Lumpur for a vacation but subsequently ran into the accident on their way to Port Dickson.

The family member revealed that the couple's two sons, Muhammad Asyraf, 27, and Muhammad Hamka, 24, had skipped the trip.

Mr Hamka co-manages Mr Rosli's motorbike dealership business with him and had stayed behind to manage the business in his stead.

Another female relative told the paper that Asyraf's wife was pregnant and was scheduled to deliver the family's first grandson this month.

Mr Ashraf had chosen to forgo the trip to stay behind in Singapore to look after his wife.

Unfortunately, neither Mr Rosli nor Madam Maimunah managed to see their grandchild.

Mr Rosli has eight siblings, and when reporters visited the family's flat, they observed over 20 family members gathered there.

Mr Rosli's mother, looking distraught, sat in a wheelchair in the living room.

A spokesman said that the rest of the family was alerted to the accident after photos and videos of the accident went viral on social media.

Although they have since told Mr Rosli's mother about the tragedy, they are reluctant to show her the graphic images.