Leader of the Opposition Pritam Singh said he will address Parliament's Committee of Privileges report next week when the House sits.

SINGAPORE - Leader of the Opposition and Workers' Party (WP) chief Pritam Singh said he will continue his work "as per normal" until the recommendation for him to be investigated by the public prosecutor, as outlined by Parliament's Committee of Privileges (COP), has been resolved.

WP vice-chair Faisal Manap — whom the committee also recommended face further investigations for refusing to answer questions it put forth to him — will do the same, said Mr Singh in a Facebook post on Thursday (Feb 10).

His post came in response to the committee's report, which it presented to Parliament and made public earlier on Thursday.

In its report, the committee had recommended Mr Singh be referred to the public prosecutor for further investigations "with a view to considering if criminal proceedings ought to be instituted in respect of his conduct before the COP".

The committee had said it was satisfied, on the evidence, that Mr Singh had lied on affirmation. Parliament is set to debate the recommendations when it sits next week.

In his statement, Mr Singh said there remain a number of unknowns, assuming Parliament adopts the committee's recommendations. 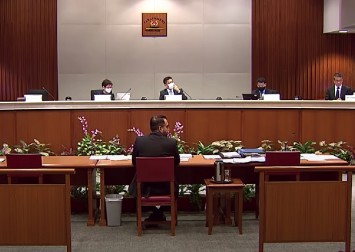 "These include the eventual decision of the public prosecutor to prosecute, the intervening time before the matter goes to trial, the eventual verdict and any sentence meted out, and the prospect of both Faisal and I losing our parliamentary seats and stepping down as Members of Parliament if either of us is fined $2,000 or more," he added.

"Until there is some resolution to these matters, which may take some time yet, Faisal and I will continue our work — including but not limited to Meet-the-People Sessions, estate walks, house visits and other parliamentary commitments — as per normal."

"I will speak more extensively on the COP report in Parliament when it is tabled for debate, expected to be some time next week," he added.

The committee's report followed a series of hearings held in December that looked into lies that former WP MP Raeesah Khan had told in Parliament last August and October, as well as the WP leaders' involvement in the matter.

See the full report released by the Committee of Privileges.