Pritam Singh to set aside 50% of Leader of the Opposition pay for needy residents, charitable causes

As Leader of the Opposition, Workers' Party chief Pritam Singh will get double the allowance of an elected MP, and his annual package will be $385,000.

SINGAPORE - Workers' Party chief Pritam Singh said on Tuesday (July 28) that he will contribute half of his salary as Leader of the Opposition towards his party, programmes for residents in the party's three constituencies, as well as charitable causes.

After the Government announced the duties and privileges that will be accorded to him in the role, Mr Singh said in a Facebook post that he had discussed the appointment with his wife and they both "felt strongly that a percentage of the salary should be used for a greater purpose".

As Leader of the Opposition (LO), Mr Singh will get double the allowance of an elected MP, and his annual package will be $385,000.

He said he would allocate 50 per cent of the salary, after taxes, to any of several uses, including to the WP Community Fund or WP Grassroots Committee to help low-income residents in Aljunied GRC, Sengkang GRC and Hougang SMC, community programmes in the three constituencies, charitable or worthy causes, and specific needs of the WP.

His post drew more than 400 comments from netizens, who expressed their respect and thanks.

Mr Singh, who had thanked his wife, Loveleen Kaur Walia, on social media for her support, revealed he had discussed his appointment as LO with her as it would take away time from his family.

He said: "While I am grateful to receive the additional support and remuneration that comes with the title of Leader of the Opposition, the appointment will require more investment of my time and longer hours away from my family.

"After putting the girls to bed, my wife and I knew there were some things we wanted to talk about arising from the LO appointment. Amongst other things, we spoke about what the salary increase would mean for our family. Both of us felt strongly that a percentage of the salary should be used for a greater purpose." 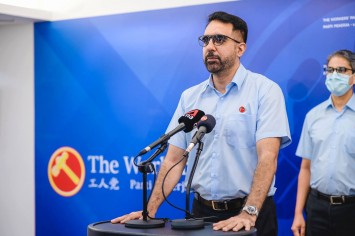 Describing it as a privilege to be appointed as LO, he said: "The LO appointment carries with it many additional responsibilities that I will have to shoulder. The road ahead will not be easy but I thank Singaporeans for their support and encouragement."

Besides higher pay, Mr Singh will also receive an allowance to hire up to three legislative assistants and will be provided with a secretary to support him administratively in Parliamentary business.

This is meant to help him in his new duties, which include leading and organising scrutiny of the Government's positions and actions, and leading opposition in presenting alternative views during debates on policies.

He will also be consulted on the appointment of opposition MPs to select committees, and may sometimes be asked to attend official state functions and meetings alongside members of the Government and the public service.

When Parliament reopens on 24 August, it will have a total of 12 Opposition MPs — ten from the Workers’ Party, and two...

To ensure he can fulfil his role, the Aljunied GRC MP will be accorded certain privileges.

These include, among other things, having the right of first response among MPs and also being given a longer speaking duration for speeches, equivalent to that given to political officeholders.

He will also get briefings on issues of national interest, such as on national security and external relations, on top of the government data and information available to other MPs.