SINGAPORE - Several private clinics here have been seeing a demand for Sinovac and Sinopharm vaccines as booster shots, owing largely to a fear of side effects from the third dose of an mRNA jab.

So far, it has been recommended that those aged 50 and above take an additional mRNA shot of either the Pfizer-BioNTech or Moderna vaccines at least six months after their two-dose vaccine regimen, to ensure a high level of protection from severe disease is maintained across a longer period.

The Expert Committee on Covid-19 Vaccination is still studying the possibility of mixing vaccines for the booster dose.

Dr Chua Guan Kiat, a general practitioner at Chua Medical Clinic and Surgery in Bukit Batok, told The Straits Times that there has so far been a "sizeable demand" for Sinovac and Sinopharm as vaccine boosters, the bulk of which comes from the elderly who had been fully vaccinated with an mRNA vaccine.

Since his clinic started offering Sinovac jabs on Sept 23, Dr Chua said that 20 to 30 doses of booster vaccine are being administered each day, with demand likely to rise steadily now that those over 50 have also been invited to take their booster doses.

He added that the fear of potential side effects from a third dose of the mRNA vaccine has been a major driving force to opt for an inactivated vaccine like Sinovac as a booster.

Construction worker Gu Jiangang, 42, who took the Sinovac booster on Tuesday (Oct 5), told ST he had fever and soreness at the injection site after his second dose of the Moderna vaccine in May, and hence he felt more comfortable taking Sinovac as a booster.

The Chinese national added that his company had mandated that all workers be vaccinated against Covid-19, so he felt forced to take the Moderna jabs despite having known allergies. 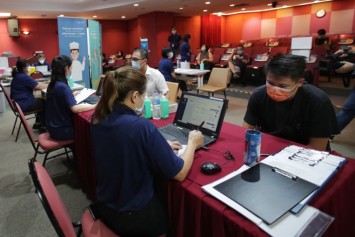 Similarly, a man who wanted to be known only as Mr Loh, 57, who works in construction, decided to take the Sinopharm booster on Monday despite receiving an invitation to book a Moderna booster jab.

As he had previously received two doses of Pfizer, he felt there would be fewer side effects if he mixed vaccines with an inactivated vaccine.

She noted that some companies in manufacturing, construction and supermarkets have also arranged with the clinic to have their staff vaccinated with a booster dose of Sinopharm in the hopes of limiting workplace transmission.

One other reason was the US Food Drug Administration not recommending Pfizer booster shots for those aged below 65, as there were concerns about the risk of doing so, compared with the benefits, she noted.

Dr Leong Hoe Nam, an infectious diseases physician at Rophi Clinic, said that many of his patients who received both doses of the Pfizer vaccine had requested for the Sinopharm vaccine as a booster.

"Anecdotally, many who had one dose of the inactivated vaccine after receiving two doses of the mRNA had very good antibody results. No doubt, the best antibody results were still obtained with a third mRNA dose, but many didn't want to go through the same side effects again," he said.

One of his customers, Mr Ho, who is in his 60s, recently received his Sinopharm booster jab after two doses of the Pfizer vaccine.

Asked why he had opted for Sinopharm instead of an mRNA vaccine, Mr Ho said he felt the Sinopharm vaccine uses a tried-and-tested inactivated virus technology, whereas the mRNA technique was previously used to help stimulate antibody response in patients with late-stage cancers.

Mr Ho, who declined to give his full name and his occupation, said the long-term effects of mRNA still remain unknown.

He told ST that he experienced severe pain at his injection site after his second Pfizer dose but not after his Sinopharm booster.

Dr Alvin Neo, head of clinical projects at Northeast Medical Group, told ST that its Kallang and Bedok branches, which currently administer the Sinopharm vaccine, had received a number of inquiries on the vaccine as a booster.

However, his clinics will not be administering Sinopharm as a booster jab until mixing vaccines becomes officially recommended by the Ministry of Health.

Professor Hsu Li Yang, vice-dean of global health at the National University of Singapore's Saw Swee Hock School of Public Health, said it would be best to follow MOH's guidelines on one's eligibility for the booster dose and the type of vaccine to use, as the Expert Committee on Covid-19 vaccination would have pored through and deliberated on the available data extensively.

He noted that a Chinese study suggested that a third jab of Sinovac will provide a boost to neutralising antibody levels when given six months after the primary series, while another study showed that there has been robust B-cell and T-cell responses when a third dose of the Sinopharm vaccine is administered.

However, both studies are still in their pre-print and have not been peer reviewed.

"We do not have the data yet for a heterologous boost (such as giving Sinovac after two doses of Pfizer), but it is not unreasonable to believe that there will be a boost to neutralising antibody levels here as well," he said.

Similarly, Professor David Allen, Associate Vice-President (Health Innovation and Translation) at NUS, said that based on the available data, a third Sinovac dose provides a modest boost to the levels of neutralising antibodies after two prior doses of the same vaccine, and would therefore be expected to have similar effects as a third dose for other vaccines.

"However, Sinovac as a third dose has not yet been shown to be equal or superior to other third-dose vaccine options, such as mRNA and adenoviral vector vaccines," said Prof Allen.

That being said, Prof Hsu reiterated that we do not completely understand whether everyone should get a booster dose and, if so, when the optimal time would be.

"We also do not know for sure which or whether there is a best vaccine to be used as a booster. Broadly speaking, all the vaccines used as boosters now appear to be very safe when given as a third dose, and do result in a strong immunogenic response (albeit varying between the different vaccines).

"How long this booster effect lasts, we do not know yet, nor whether there is significantly stronger protection against severe disease and death," he added.