Private carpooling services may have been banned for more than a year due to the Covid-19 safety risk, but here's another reason why hitching a ride on a stranger's car may turn out to be more than what one bargained for.

In a post on Instagram page @sgfollowsall, a woman shared how she was inappropriately propositioned while arranging the details of a pick-up. The hitch ride is believed to have been arranged privately on a Telegram chat group.

She wrote that the driver, shown in the chat message as "Clarance", sounded "so normal and nice at first, but turns out he's just another chikopek (lecher)".

She added: "I don't want to think about what would happen if I actually got into his car, stay safe everybody."

The conversation began with the woman offering details of the pickup and drop-off points and negotiating the price. The driver then replied: "Okay lah for you can cheaper. [sic]"

He continued that $5 for the fare would be sufficient, adding "just take it as [you] treat me Starbucks haha". He also indicated that he's driving a "red Mercedes".

That's when the conversation took a pervy turn.

When the woman thanked him for the discount, the driver noted that it was "for pretty people like you only", before proceeding to comment that she was "really hot".

The woman appeared to ignore his comments, but the driver pressed on, escalating his advances. He proceeded to ask if he could "rest my hand on your thigh while driving", offering her $300 "in cash before we drive off".

According to a screengrab of the chat messages, she firmly rejected him twice but the driver did not take no for an answer, upping his offer to $500, "just on your thigh".

Even after the passenger told him that she was cancelling the ride, the driver persisted. He upped the figure from $1,000 to $2,000 before finally arriving at his final offer of $3,000, which would include "touching" the passenger's chest.

The conversation ended when the woman stopped responding, and with the driver leaving his final plea: "I'm sincere about it. Hope you can consider." 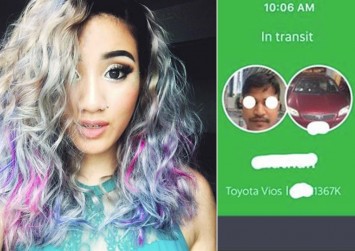 The woman later spoke up in the comments section of the Instagram page, addressing comments from netizens that she should have taken the money, or that they would have accepted the driver's lewd request.

Identified as "Joanna" according to her IG handle @waddlinggrapes, she wrote: "It isn't about the money, man".

As to why she didn't make a police report, she replied to a commenter that the driver's account "is a spam account, unfortunately", and that "there's no number or username".

AsiaOne has reached out to Joanna for more information.

Since April 16 last year, the Land Transport Authority (LTA) has banned all private carpooling services in Singapore due to the lack of proper records for contact tracing during the coronavirus pandemic. This includes car-pooling matched through mediums such as Telegram, according to an advisory posted on LTA's website.

Commercial car-pooling services such as GrabHitch and Ryde were also ordered to suspend their services from May 16.

According to a report in The New Paper in May this year, the restrictions have not stopped private hitch services from proliferating on Telegram chat groups, such as SG Hitch and Singapore Secret Students Free Hitch.