SINGAPORE — A last-minute protest at Speakers' Corner in Hong Lim Park on Saturday (July 16) against Singapore's decision to let ousted Sri Lankan president Gotabaya Rajapaksa into the country drew an audience of one.

Organiser Prabu Ramachandran, 34, a former candidate for Peoples Voice (PV) at the 2020 General Election, said: "Hardly anyone is speaking about this.

"I thought that someone ought to speak about this, about the message that we are sending to the rest of the world and the international community by having Mr Gotabaya Rajapaksa here.

"He is unwanted. He is a politically exposed person. Unlike what has been said, he is not just another Sri Lankan with a passport. Why are we taking him in?"

Slated to initially last from 4pm to 6pm, he ended it early at 4.48pm because of the low turnout.

He also live-streamed the protest on Facebook, and about 20 people watched it live. 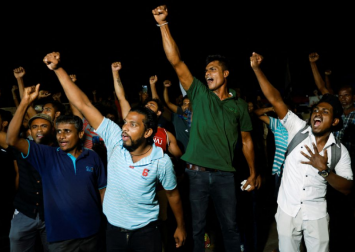 The only other speaker at the protest was blogger Leong Sze Hian, 68, also a former PV candidate.

He questioned why Mr Rajapaksa chose to resign only in Singapore. He and Mr Prabu also asked for details of Mr Rajapaksa's bank accounts here to be made public.

Speakers' Corner is the only place in Singapore where protests can legally be held without a permit.

Developments in Sri Lanka have seen protests against Mr Rajapaksa in the country as well as the Maldives and globally.

Shortly after he arrived in Singapore on Thursday (July 14), the police reminded any would-be demonstrators about the consequences of breaking the law.

"Police ask that the public, Singaporeans, residents, work pass holders and social visitors alike, abide by our local laws," they said. "Action will be taken against anyone participating in a public assembly that is illegal," they added.

Observers noted that Mr Rajapaksa was still president of Sri Lanka at the time he entered Singapore and was issued a social visit pass for a private visit.

The Straits Times approached about 20 Sri Lankan citizens in Singapore and Singaporeans of Sri Lankan background or with close links to the country for their views on the Republic's decision to allow him entry, and most declined to comment.

However, some felt that letting Mr Rajapaksa stay in Singapore contradicted the country's strong stance against corruption and racism.

They pointed to how, in addition to his gross mismanagement of Sri Lanka's economy, Mr Rajapaksa oversaw the killing of tens of thousands of Tamils at the end of the Sri Lankan civil war in 2009 while he was defence secretary.

He also leaves behind a legacy of a heavily militarised northern and eastern Sri Lanka, which is home to many Tamil and Muslim communities.

A Singaporean lawyer of South Asian descent, who requested anonymity, said he was "shocked and hurt" at the Singapore Government's decision to allow Mr Rajapaksa to visit the country.

"Isn't the Parliament in Sri Lanka meeting about where all the money has gone? The very person who is responsible for an economic disaster and has run away - why should Singapore be the country that's a stopover for him?"

The lawyer added: "Any Sri Lankan, whether they are Tamil or not, will feel a sting that he is here around us in Singapore."

An 81-year-old retired criminal law professor, a Singaporean of Tamil origin, said: "Lee Kuan Yew always maintained that Sri Lanka is a good example of how we should not treat minorities. The divisive policy is dangerous. So for (Mr Rajapaksa) to now be let into the country is a disgrace."

In a Change.org petition created on Thursday, the day Mr Rajapaksa landed in Singapore, blockchain businessman Raymond Ng wrote that he had filed a police report in Singapore against Mr Rajapaksa for money laundering, compelled by his "loyalty to the Republic of Singapore".

As at Saturday, more than 2,000 people have signed the petition, although it is not known how many of these were unique or from Singapore.

These tags - which show up when users search for who has interacted with the Government's Twitter account - were swiftly removed.

But there were also some who thought Singapore was well within its rights to allow Mr Rajapaksa entry. They noted that when he arrived at Changi Airport on Thursday, he was still the president of Sri Lanka.

Dr Lahiru Wijedasa, a conservation biologist who is a Singaporean of Sri Lankan origin, said Mr Rajapaksa was "a free man" with no criminal convictions and had "legitimately left" Sri Lanka.

"So I don't think we (in Singapore) are giving him shelter. Merely extending the on-arrival visa facilities open to all Sri Lankans," Dr Wijedasa said.

On Instagram, Ms Yashora Samaradivakara, a Sri Lankan in Singapore, called for more sensitivity from all who are talking about the Sri Lanka crisis, where food, gas and electricity are in short supply.

"To you, it's a funny piece of news on your feed; to them, it's their lives/reality. The people of Sri Lanka do not deserve this," she wrote.