The Aviation Herald suggested that the damage was caused by stones that were thrown upwards by aircraft wheels.

SINGAPORE - A Singapore Airlines (SIA) cargo plane is undergoing repairs in Brussels after holes were spotted on the bottom of the plane.

SIA said on Sunday evening (Feb 28) that the affected plane was a Boeing 747 - 400 freighter, which operated on the SQ7951 service from Dallas to Brussels on Feb 26.

The flight crew had conducted the necessary aircraft visual checks according to procedure, said SIA.

The flight then took off and landed in Brussels without incident, the carrier added.

But the plane was "found to have had some damage on its body during a post-flight inspection".

SIA said: "Investigations are underway to determine the cause of the damage.

"The aircraft is undergoing repairs at Brussels and will return to Singapore after the repairs have been completed."

Aviation news website The Aviation Herald had posted photos showing what it said were multiple punctures on the bottom of the plane.

In one photo, a rock is seen stuck in one of the holes.

The website suggested that the damage was caused by stones that were thrown upwards by aircraft wheels while the plane was landing on the runway.

It said initial information had suggested that the stones had fallen off a truck that was being used for renovation works at the Brussels Airport. 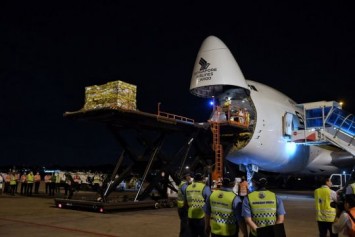 SIA currently operates a fleet of seven Boeing 747 - 400 cargo planes. The planes had been used to ferry the initial shipments of both the Pfizer-BioNTech and Moderna Covid-19 vaccines from Brussels to Singapore in recent months.

It recently said the global crunch in airfreight capacity as carriers cut flights has led to improvements in its cargo loads and yields, amid strong demand for pharmaceutical and e-commerce shipments.

The airline has also added capacity by stepping up the frequency of passenger aircraft operating cargo-only flights, and resumed more passenger services.

"The utilisation of the freighter fleet was also maximised to deliver more cargo capacity," SIA added.