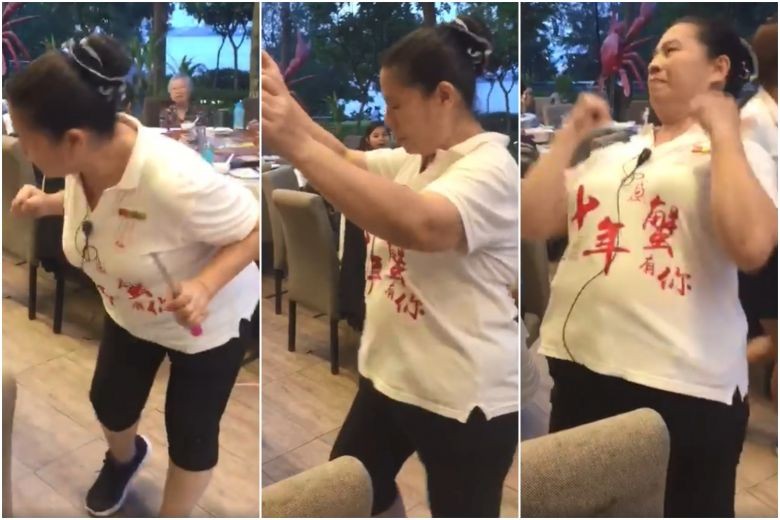 SINGAPORE - A video of a middle-aged waitress performing a "chicken dance" at a restaurant in Punggol has gone viral with more than a million views, sparking discussion online that she was made to do the dance for work.

But the unwitting Internet star, Madam Loh Feng Ling, told The Straits Times on Thursday (Aug 30) that she did the jig on her own accord.

"I am just an auntie who loves to dance and gao xiao," said the 52-year-old in Mandarin, using a term that means to make people laugh.

The video, which was uploaded on Facebook last week by user Anthony Boey, has Madam Loh showing off some sprightly moves to an upbeat song that contains the sounds of chickens clucking, as she serves up a $38 flambeed chicken dish to customers.

The clip caused a stir online, with some speculating that she had been forced to dance.

Mr Francis Ng, 46, the owner of the restaurant, House Of Seafood, said he decided to play the music whenever the dish was served in May to entertain customers, but did not require his service staff to dance.

Madam Loh, who said she got her dancing chops from working at a karaoke when she was younger, said: "I did it out of my own sincere desire. No matter what kind of music is played, I will naturally follow and dance."

Mr Ng added: "We are very lucky to have her, she is very expressive and always positive at work. When I told her that she was famous online, she was actually quite shy about it."

When Madam Loh heard about some of the negative feedback, she was naturally conscious. But to her, customer satisfaction is the most important.

"Whatever the dance, I will put in my heart and soul," said Madam Loh, who is married to a construction worker and has three daughters aged 12, 18 and 21.

Mr Ng said he rewarded Madam Loh with a red packet for her efforts after the video went viral.

"Since then, all the other waiters have been dancing also," he said with a laugh.