Raeesah Khan should not have shared account that contained untruths in Parliament: Pritam Singh

Leader of the Opposition Pritam Singh said Ms Raeesah had told him that she wanted to set the record straight in Parliament.

SINGAPORE - Ms Raeesah Khan (Sengkang GRC) should not have shared in Parliament an account that contained untruths, Leader of the Opposition Pritam Singh said on Monday (Nov 1).

In a statement, the Workers' Party secretary-general said that the Parliament (Privileges, Immunities and Powers) Act gives an MP significant freedom of speech, to the extent that what is said in Parliament cannot be impeached or questioned outside Parliament.

"However, this freedom of speech does not extend to communicating untruthful accounts, even if an MP's motives are not malicious," Mr Singh said.

"(Ms Raeesah) shared with me that she wanted to set the record straight in Parliament. This was the correct thing to do."

Posted by AsiaOne on Wednesday, November 3, 2021

Ms Raeesah admitted on Monday that she had lied about details of a sexual assault case that she had alleged was mishandled by the police. She did not accompany the rape victim to a police station, as she had recounted in the House on Aug 3 during a speech.

Instead, she said the victim had shared the account in a support group for women, which Ms Raeesah had attended in her capacity as a survivor of sexual assault, and that she did not have the victim's consent to share her story in Parliament.

The Association of Women for Action and Research (Aware) on Monday said Ms Raeesah's actions had set back advocacy around sexual violence in Singapore and did a disservice to other survivors.

"While we believe that her intentions — to raise the need for more sensitive first response from officials handling sexual violence cases — were sound, we are disappointed that (Ms Raeesah) lied about the details of this situation." 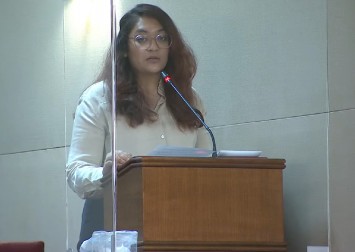 The gender equality advocacy group said on Facebook that sexual assault advocacy must be survivor-centric, which means it must put the needs of survivors above all other considerations.

It added that Ms Raeesah's decision to share the participant's experiences without seeking permission was not survivor-centric.

"Survivors are unlikely to talk about the trauma they experience unless they feel they can do so safely, without their privacy being violated," Aware said.

"This is why support groups, which play an important role in allowing survivors to process feelings, connect and recognise that they are not alone, impose rules of confidentiality upon participants. The sanctity of such spaces must be maintained, and survivors must continue to feel comfortable to attend them."

Ms Raeesah's actions also play into the persistent myth that women frequently lie about assault, which has long been used to discredit survivors of violence while enabling perpetrators to escape accountability, Aware noted.

It cited figures from the Ministry of Home Affairs that showed that only 4 per cent of sexual assault reports are found to be false. On the other hand, the majority of survivors do not file police reports, Aware said.

It added: "Unfortunately, high-profile instances of untrue stories can disproportionately colour the way society views other testimonies from women."

Aware noted that Ms Raeesah's own experience of sexual assault had played a role in her decision to conceal the truth about how she had heard about the other survivor's account.

"We sympathise greatly with her reluctance to disclose her experience... it can be immensely difficult and traumatic to identify yourself as a victim-survivor of assault, particularly in the public eye."

Aware also said it hopes the incident does not undermine the original matter that Ms Raeesah was trying to address, namely the need to deal with sexual assault more sensitively and effectively.

"This is an important societal issue that we hope will continue to be discussed and debated in Parliament," the group said.