It's that time of the year again — Muslims worldwide have started fasting from dawn till dusk during the holy month of Ramadan which started on Tuesday (April 13).

The act of worship is religiously significant, but what happens when non-Muslims take up fasting as part of a "challenge" just for clicks on social media?

If you've seen any local influencer doing so in a video — probably titled "Chinese try fasting for a week" — you've probably heard something along the lines of "I'm not used to waking up so early" or "Oh my god, I'm so hungry!"

"Can someone describe to me the taste of a burger," local comedian Farah Lola whines in a TikTok video, her accent and expressions a perfect imitation of the influencers. The clip has gone viral since it was posted on Wednesday.

Good job now do it for a month ##ramadan ##ramaDONE

She also exaggerates the way they tend to joke about accidentally reaching out for food and needing a reminder from their Muslim partner with an over-the-top laugh and a pained expression.

For added comedic effect, the clip even includes her painstakingly trying to eat noodles with her hands because: "Don't you use your hands?"

"Good job, now do it for a month. #RamaDone," Lola deadpans in the caption.

Viewers were sent howling with laughter by her satirical rendition of the challenge videos and many praised her for nailing the influencers' behaviour.

Some couldn't help but chime in with their own observations.

And while she didn't name any names, the viewers seem to have an idea of which influencers she took inspiration from.

Still, there's nothing stopping non-Muslims from partaking in fasting during Ramadan as long as they understand and respect the significance behind the spiritual discipline.

Read Also
Ramadan fasting: Understanding the spiritual and physical significance of the ritual 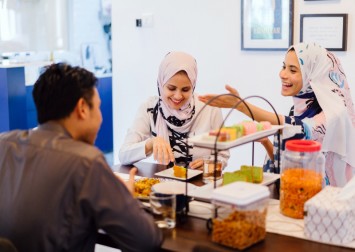 Since fasting might be new to some, here's how to avoid the pitfalls associated with it.

Considering how there wouldn't be any intake of food or fluids during the day, it's important not to skip the pre-dawn meal (sahur). By denying the body's needs, you'd more likely to experience dehydration, sluggishness and a lack of concentration, which could lead to failing the fast.

Sahur should also be a well-balanced meal with carbs, protein, fibre and of course, water.

It is also a good idea to minimise physical exertion, especially on a hot day.