Phoon Chiu Yoke will be remanded at at the Institute of Mental Health for psychiatric observation.

SINGAPORE - A woman seen in a viral video clip refusing to don a mask at Marina Bay Sands (MBS) on May 15 appeared in a district court on Tuesday (May 25) and was handed multiple charges under the Covid-19 (Temporary Measures) Act over similar offences.

Phoon Chiu Yoke, 53, was also handed one charge under the Infectious Diseases Act.

In a joint statement, the police and the Immigration and Checkpoints Authority (ICA) said the Singaporean was arrested on Tuesday.

They added that she had arrived in Singapore from Britain on June 28 last year.

She then had to serve a 14-day stay home notice (SHN) from that day until July 12.

The agencies said: "As she was required to serve her SHN at a dedicated facility, she was brought to a hotel in the downtown area after immigration clearance.

"Investigations showed that the woman allegedly left her hotel room during the SHN period on several occasions and did not wear a mask while outside her hotel room."

ICA and the police added that Phoon is said to have failed to wear a mask in public on at least four other occasions between Dec 2 last year and May 24 this year. 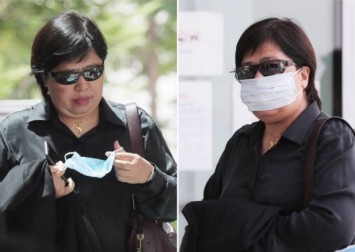 She allegedly committed the offences at various locations including MBS, a shopping mall in Eu Tong Sen Street and outside the State Courts building.

According to the statement, police interviewed Phoon on May 15 but she allegedly reoffended nine days later after leaving the State Courts.

The two agencies said: "Such conduct poses a real risk to public health given the current Covid-19 situation."

Phoon will be remanded at at the Institute of Mental Health for psychiatric observation. Her case has been adjourned to June 8.