Those who continue to display the flag after Sept 30, will risk being fined up to $1,000.

SINGAPORE - In a few more days, residents will have to stop displaying the national flag outside their homes.

After Wednesday (Sept 30), those who continue to display the flag will risk being fined up to $1,000 under the Singapore Arms and Flag and National Anthem Rules.

Every year, the flag can be displayed outside a building or in an open space without a flagpole between July 1 and Sept 30.

Earlier this year, the timeframe was extended to allow the flag to be displayed in such a manner from April 25 to Sept 30 as a rallying symbol during the ongoing Covid-19 pandemic.

The Ministry of Culture, Community and Youth (MCCY) had said that the move to amend the rules to allow the flag to be displayed for a longer period was in response to requests from the public.

Following the amendment, a Straits Times Forum letter writer asked if the ministry would consider allowing the flag to be displayed outside homes throughout the year.

"Many other countries allow their flags to be displayed in homes, businesses and vehicles throughout the year, as long as the proper protocols are observed," said the writer, Mr Dhevarajan Devadas.

He added that he noticed that there had been a "visible decline" in the number of people displaying the flag outside their homes during the National Day period, and granting more leeway in the display of the flag might help. 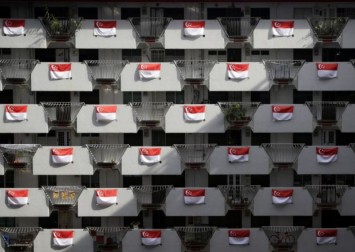 In response, senior director of MCCY's resilience and engagement division, Mr Letchumanan Narayanan, said: "One consideration for allowing the display of the flag will be whether we can safeguard the dignity of the flag, including how it could be subject to wear and tear resulting from extended display or neglect."

He added that the rules for displaying the flag have evolved with time.

In 2007, the rules were amended to allow the flag to be displayed without a flagpole or the need to be illuminated at night between July 1 and Sept 30. Previously, this was allowed only during the month of August for National Day celebrations.

Bukit Batok resident Amelia Koh, 29, who takes pride in displaying the national flag outside her home every year, said it was nice to be able to display the flag earlier this year.

"Back then when Covid-19 began, the Government was encouraging us to hang the flags as a sign of solidarity. Seeing everyone displaying their flags in the lead-up to National Day was a good feeling," said Ms Koh, an engineer.

Two weeks ago, she stopped displaying the flag to keep within the rules.

"I saw my neighbours keeping it, so I told myself that I'd better keep it now too," she said with a chuckle.