Residents rush to help one another escape from Bedok North blaze

Residents comforting one another in the void deck after a fire broke out in a flat in Bedok North on May 13, 2022.

The logistics driver lives in a three-room flat in Block 409 Bedok North Avenue 2, next to the unit that caught fire. Three people, including a three-year-old, have died.

Speaking to The Straits Times, Mr Toh, who lives with his mother, 67, said a neighbour carried his mother, who uses a wheelchair, to safety.

"There was a man from a unit upstairs who came and quickly grabbed my mother, put her on his back... while I took her wheelchair."

Residents whom ST spoke to said many of their neighbours helped them escape after the fire broke out.

In the aftermath of the fire, residents still in their pyjamas could be seen comforting and hugging one another as the affected families made their way to community hub Heartbeat@Bedok where refreshments were provided by the East Coast Town Council. 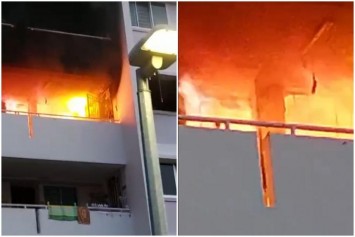 Mrs Shameem Ashraf, 30, a housewife living in the opposite block who witnessed the fire unfold in the morning, said it was heartening to see "all these people rushing and shouting out to help one another".

"From where I was, I could see people piggybacking seniors down the stairs and a barefooted man checking if they were okay.

"It made me feel blessed to live in Singapore and in this neighbourhood. If you are in need, you know that the people around you will really try their best to help."

Mr Tan Kiat How, Minister of State for Communications and Information and for National Development, and an MP for East Coast GRC, said efforts are under way to find accommodation for one of the occupants.

Minor repair works will be carried out by the town council for the unit next to the one that caught fire, such as the installation of a new front door, Mr Tan added.

UPDATE: Three people died in a fire that broke out in the living room of a flat in Block 409 Bedok North on early Friday...

He thanked the residents of the block for looking out for one another.

"I just want to really thank the volunteers and residents at Kampong Chai Chee. They were the ones who went to the block and helped evacuate residents, including people who were having breakfast at Block 216 (Bedok Food Centre and Market).

"This really shows the kampung spirit that we have in our neighbourhood."