SINGAPORE - Another restaurant has come under fire for having used an arcade claw machine on live animals previously.

The seafood restaurant in Jurong initially used the machine on live lobsters when it first opened in January. However, it was soon told by the then Agri-Food and Veterinary Authority (AVA) to stop the practice as it was cruel to the animals.

Sea Tripod Seafood Group, whose sole restaurant is its Jurong outlet, says that it now uses the machine as a tank for displaying lobsters and does not let customers play with the mechanical claw function. 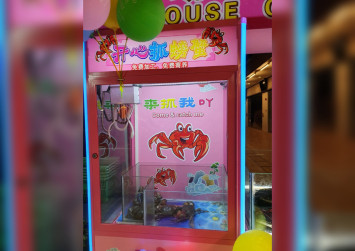 The restaurant's manager, who wanted to be known only as Mr Li, told The Straits Times that the machine was bought from China for $3,000 and added: "We don't want to offend any people or break any laws."

"If we receive any complaints from government officials, we'll definitely take more action, but for now we don't play, we just display," he said.

When ST visited the restaurant on Saturday (Oct 26), the machine was found in the outdoor seating area with three live lobsters in it.

The machine had a plastic claw inside it, and a black signboard on top of it that read "Catch lobster, and enjoy it! (Cook with no extra charge)", but tape had been placed over the controls.

The Society for the Prevention of Cruelty to Animals (SPCA) was surprised when it was alerted to the Jurong restaurant by a member of the public.

SPCA executive director Jaipal Singh Gill said: "Our concern and worry is that it becomes a trend and is normalised, so we must take action quickly to stop this from becoming a norm."

While Dr Gill appreciated that the agencies were in agreement with the SPCA, he said the restaurant should better clarify its stance. "Using the claw machine for display still sends a wrong message."

This comes after the use of a claw machine on live crabs at another seafood restaurant, House of Seafood, in Punggol, had been criticised by SPCA and members of the public.

The restaurant has since replaced the live crabs in the claw machine with cardboard boxes which can be exchanged for vacuum-packed cooked crab meat with sauce.

Chief executive officer of the House of Seafood, Mr Francis Ng, apologised for the incident and said: "These machines are very common overseas, but in Singapore there are a lot of animal lovers and it caused them a lot of sadness, so we apologise for that."

Mr Ng added that there had been a discussion with National Parks Board's Animal and Veterinary Service (AVS) on Friday, and he will be meeting SPCA representatives next week about further action the restaurant can take.

The Straits Times has contacted NParks for more information about the two cases.