Law Minister K. Shanmugam noted that if the attack had succeeded, it would likely incite fear and conflict between different racial and religious groups in Singapore.

SINGAPORE - The rise of right-wing extremism creeping into Singapore is a worrying development, and is part of a larger wave sweeping across the world, said Home Affairs and Law Minister K. Shanmugam on Wednesday (Jan 27).

He was commenting on the case of a 16-year-old Singaporean student who was detained under the Internal Security Act (ISA) in December for plotting to attack Muslims at two mosques here on the second anniversary of the Christchurch attacks in New Zealand.

The Protestant Christian of Indian ethnicity was influenced by Christchurch shooter Brenton Tarrant, and is the first ISA detainee to be influenced by far-right extremist ideology.

"This boy is 16 years old but he was extremely serious," the minister told reporters at the Home Team Science and Technology Agency.

"Violent impulses, I've said this many times, is not restricted to any particular racial group or religious group. It can occur among anyone. It's really a question of being exposed to hate speech and then being influenced by it."

Singapore's strategy has been to engage with the community and religious organisations on maintaining religious and racial harmony, as well as use the ISA to pick up radicalised individuals before they can cause any harm, he said.

Mr Shanmugam noted that if the attack had succeeded, it would likely incite fear and conflict between different racial and religious groups in Singapore. 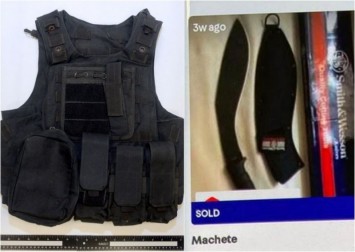 Making the point that such extremism is not restricted to one particular group, he pointed to terrorists who claim to act in the name of Islam, as well as right-wing extremists with hateful manifestos.

Both of them influenced Tarrant, who on March 15, 2019, murdered over 50 Muslims in a Christchurch mosque.

"And Tarrant inspired this boy, whom we picked up. It is sad, I would say, that it's come to this, the world has come to this. And it's also creeping in into Singapore," said Mr Shanmugam.

He noted that the storming of the United States Capitol in Washington by right-wing protesters on Jan 6 was seen by many in that segment "both as a symbolic victory and a strategic defeat which they need to learn from". This issue is going to be a "long battle" for the world and Singapore, he added.

Mr Shanmugam also flagged another worrying trend - that seven young people under the age of 20 have been arrested under the ISA since 2015 after getting radicalised through the Internet.

Four have been detained, while three were served with restriction orders.

On the latest case, he said the youth will receive religious counselling from Christian religious leaders as part of his long-term rehabilitation.

"With rehabilitation, my hope is that after a number of years, he can be released and carry on with his life," he added.

While the police has considerably enhanced its counter-terrorism response capabilities since the November 2015 attacks in Paris to focus on responding quickly to terror incidents and on areas that are prone to attacks, it will not be easy to prevent attacks like the one the youth had planned every single time, he cautioned.

He credited the ISD for being "extremely effective in picking out these people so that the attacks haven't even taken place".

To weed out more of such cases, he said the ISD and the Ministry of Culture, Community and Youth (MCCY) are engaging the religious organisations across the different religions in being more vigilant. Advisories have also been issued to these groups to strengthen their crisis-preparedness.

"We can only say thank goodness we are not like many other parts of the world. Otherwise, instead of standing before you and saying that we have detained him (the youth), I will be saying, 'I'm very sorry that this has happened, this is another dastardly attack', and people will be putting flowers in memory of those who had been senselessly killed...It's the state of the world that we are in," he added.

Mr Shanmugam held up the latest case as an example of why Singapore takes a tough stance against hate speech of all forms, including songs, saying that it has "real world consequences" as it leads to the demonisation of other people.

"Our population has confidence that the Government is in the middle, and we protect you, regardless of who you are, whether you are Muslim, or Christian," he said.

"You are a human being, and your sexual inclinations don't matter. We protect you, and we make sure that there can be no violence. So that is a guarantee that this Government has always given."