Round up my ride! Bulgarian returns Singapore's damaged rental bikes

SINGAPORE - A sea of yellow and orange bicycles in Singapore's public spaces shows how quickly the city-state has embraced the shared-bike culture since major operators such as Chinese firms Ofo and Mobike first rode in a year ago.

Bulgarian piano teacher Zhivko Girginov, who has lived on the island for nine years, has not been impressed by the broken bicycles he has encountered abandoned by roads and footpaths.

"My friends complained there were damaged bikes scattered everywhere and there was nothing that can be done," he said.

"But I did not agree." The 32-year-old decided to take matters into his own hands, pulling together a team of like-minded individuals to round up and return the bikes to the warehouses of the respective companies.

Started in September, Girginov's Volunteer Bike Patrol initiative has taken off, collecting over 400 damaged bikes in about seven trips.

The group gathers the broken bicycles in one neighbourhood, moving them to a central location. Girginov then rents a lorry for $150 a trip to pick up and carry the bikes back.

Girginov has funded the effort until now, but expansion might prompt him to consider crowd-funding or seek sponsors, he said.

"We're talking to Zhivko about how we can work together to build an even stronger bike-sharing environment," said Sharon Meng, country manager of Mobike Singapore, adding that Mobike has given Girginov an unlimited usage pass to help him retrieve its bikes.

Read Also
oBikes have been found in secluded Coney Island, even a hospital: Employee 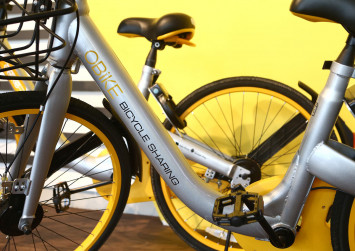 The initiative is one of many similar projects Giriginov has embarked on, and he considers the time and money well-spent.

In his opinion, such "social experiments" provoke people to consider how they can make an individual contribution to society.

"Some of my friends tell me my efforts are futile," he said, after devoting New Year's Day to a bike retrieval expedition.

"But I believe we are part of a community and we should do what we can."