SAF captain charged over death of NSF Liu Kai; 5 others charged with leaking photos of incident

SINGAPORE - A Singapore Armed Forces (SAF) officer was charged on Friday (Oct 25) in relation to the death last year of full-time national serviceman (NSF) Liu Kai, who was driving a Land Rover commanded by him.

Court documents say he had allegedly failed to keep a safety distance of 30m between the Land Rover and a Bionix Infantry Fighting Vehicle, which had reversed and mounted the driver's side of the Land Rover during a training exercise at Murai Urban Training Facility on Nov 3.

Corporal First Class (CFC) Liu, 22, a transport operator from SAF's Transport Hub West, died after the Land Rover he was driving was mounted by the Bionix despite repeated commands by the rear guide to stop the Bionix.

If convicted, Ong could be jailed for up to five years or fined, or both.

Five others were charged over the wrongful communication of official information under section 5(1) of the Official Secrets Act.

Two of them, Muhammad Arif Azman and Mohamad Haikal Mohamad Zainal Abiddin - who were doing their national service with the Singapore Civil Defence Force (SCDF) and were at the scene - took photographs of the incident and disseminated them via WhatsApp. 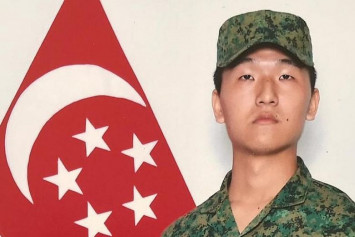 Three others received the photographs and, despite knowing that the photographs were sensitive official information, shared them further without authorisation. They are Brandon Tan Jien Jet, Thng Yu Xuan and Muhammad Zaki Haji Mokhtar.

The SCDF said on Friday that it identified the five full-time national servicemen after an internal investigation and made a police report over the leak. They were redeployed to non-frontline duties and have since completed national service.

"We have strict rules to safeguard official information and view any breach seriously," it said. "Any officer who commits offences will be dealt with in accordance with the law."

Preliminary findings on CFC Liu's incident shared by Defence Minister Ng Eng Hen in February showed that the Bionix did not stop reversing despite repeated commands for its driver to do so. It stopped only after mounting the driver's side of the Land Rover.

CFC Liu was then driving Ong from the Active Unit Training Centre, as he was assigned to evaluate the exercise troops. The 42nd Battalion Singapore Armoured Regiment (42 SAR) was conducting a two-sided company mission exercise there.

During the exercise, the Bionix stopped after it spotted several vehicles involved in the exercise passing a junction ahead of it, according to the preliminary findings of the independent Committee of Inquiry (COI) formed to look into the circumstances of the incident.

The Land Rover, which was following the Bionix to assess the crew's performance in the exercise, stopped some distance behind it.

Ong then allegedly instructed CFC Liu to overtake the Bionix, and as the latter moved forward slowly, he heard shots fired as part of the exercise.

CFC Liu then stopped the Land Rover at a maximum distance of 19.8m from the Bionix.

This was short of the 30m safe distance stated in the training safety regulations, said Dr Ng then, adding that the COI noted that it was the responsibility of the Land Rover's vehicle commander to ensure the safety distance.

Safety measures were introduced following the incident. These included having a rear-view camera on the back of the Bionix vehicle.

More experienced and regular trainers were added on the ground to supervise and train national servicemen. They will no longer just be in Land Rovers or other "soft skin" vehicles, but will be required to be in the combat vehicles with the trainees during training, added Dr Ng in February.