Police said yesterday that they are investigating 278 scam cases, mainly involving online purchases, where victims were cheated of more than $247,000.

The police verified that there were no such lucky draws conducted by Lazada and Shopee.

For the 278 scam cases, police said that a two-week operation was conducted between Oct 29 and Thursday by the Commercial Affairs Department and seven police divisions.

A total of 140 scammers and money mules were rounded up - 80 men and 60 women aged between 14 and 70 - and they are assisting with further investigations over their suspected involvement in cheating or money laundering. 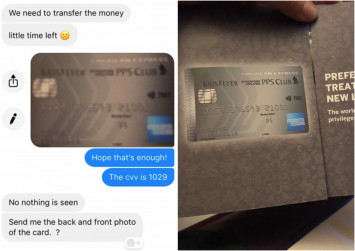 In the lucky draw scams, victims were contacted by scammers impersonating their friends or followers on social media platforms such as Facebook and Instagram.

The impersonators would ask victims for their contact numbers and images of their credit or debit cards, on the pretence of signing them up for lucky draws conducted by Lazada and Shopee.

The victims were also told to share the one-time passwords that they received. They realised they had been cheated after discovering unauthorised transactions made on their accounts.

To avoid being scammed, members of the public should be wary of online advertisements that seem too good to be true and not be impulsive, the police said.

Buyers should also arrange to meet the seller and pay upon delivery, instead of paying in advance.

The police also warned that scammers may use local bank accounts and provide identification to make themselves appear genuine.

Buyers are also warned against transferring money or giving out personal information, bank account details, credit or debit card details, and one-time passwords to anyone, including family and friends.

To avoid being made accomplices to scams, members of the public should not let others use their bank accounts or mobile lines as they will be held accountable if their accounts are linked to illegal transactions, the police said.

• Those with information related to such scams can call the police hotline on 1800-255-0000 or submit a form online at www.police.gov.sg/iwitness