On the night he drowned, Corporal Kok Yuen Chin was told he had two choices: he could either enter the fire station pump well himself, or be pushed in.

This was told to the Singapore Civil Defence Force (SCDF) officer by rota mate Staff Sergeant (SSgt) Adighazali Suhaimi during the cake-cutting ceremony on the night of May 13 last year. They had gathered in the control room at Tuas View Fire Station to celebrate Cpl Kok's impending operationally ready date.

SSgt Adighazali had told Cpl Kok, 22, a Malaysian national and Singapore permanent resident, of the possibility he would be pushed into the 12m-deep pump well, also known as the "kolam".

SSgt Adighazali was testifying yesterday in the ongoing trial of two SCDF officers, each charged with aiding a rash act that caused grievous hurt by illegal omission.

The duo, who were in charge of the fire station then, had allegedly failed to prevent a group of officers from making Cpl Kok enter the pump well, thereby endangering his life. 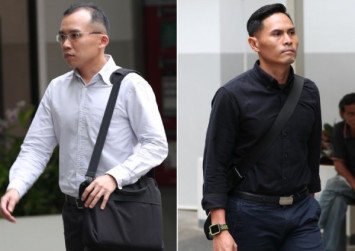 In his testimony, SSgt Adighazali, 33, said he offered Cpl Kok "brotherly advice", to choose between two options. He did this because he believed there was less chance of injury if one entered the pump well himself, as compared to when someone else pushed him in.

SSgt Adighazali also believed that someone might have pushed Cpl Kok into the well if he did not enter on his own as there was "persistent cheering to want to see him go in", he told the court.

Cpl Kok was eventually pushed into the pump well as part of activities to mark the completion of his national service. He later drowned.

For their role in the incident, three more officers were also charged, of which two - including SSgt Adighazali - have been convicted.

Last December, SSgt Adighazali was jailed a month after he pleaded guilty to intentionally obstructing the course of justice by deleting video footage that showed Cpl Kok sitting at the edge of the pump well. He has finished his sentence.

Yesterday, SSgt Adighazali said that up till the moment when they carried and put Cpl Kok next to the well, he thought it was a prank.

"We thought that the prank stopped there," he said, adding that there was then a "commotion" with people around the well cheering and urging Cpl Kok to enter it. 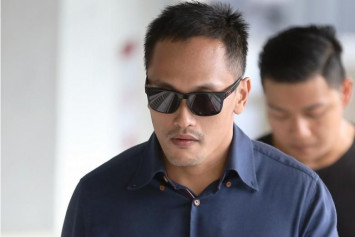 At some point, someone told them to stop the activity and SSgt Adighazali was told to quit taking the video, but the "commotion" continued.

Chong's lawyer Wee Pan Lee asked him to elaborate on what he understood of this "commotion", and SSgt Adighazali said he thought that "something was going to happen", but did not think anyone would push the NSF into the well.

But this was the moment SCDF officer Muhammad Nur Fatwa Mahmood, 34, pushed Cpl Kok in.

While on the stand, SSgt Adighazali said if Cpl Kok had voiced his objection, the activity would have stopped.

But the prosecution noted that transcripts of the video SSgt Adighazali took that night showed Cpl Kok did resist several times, including saying "cannot encik," moments before he fell into the well.

Deputy Public Prosecutor Sheryl Yeo asked: "Why did you think nothing would have happened if Cpl Kok had said no?"

SSgt Adighazali said: "In my mind, they didn't dare push anyone in."