SCDF rescues teen hiker who got stuck in Clementi Forest

A team of rescuers entered the forest and hiked 20 minutes through rough terrain to reach the family's location about 900m away.

Paramedics and firefighters involved in the rescue told The Straits Times that the teenager had been in the forest with his parents when he slipped into swampy terrain and his left leg was stuck between two thick roots.

ST understands he is 17 years old.

The SCDF received a call for assistance at 6.10pm that day.

A light fire attack vehicle from Bukit Batok Fire Station and an ambulance from Clementi Fire Station arrived at the forest nine minutes later, at the entrance opposite Maju Camp.

A team of rescuers entered the forest and hiked 20 minutes through rough terrain to reach the family's location about 900m away.

"It was rough terrain and there were many obstacles such as logs along the way," said Sergeant Shanmugam Alagudass, a section commander at Bukit Batok Fire Station.

Firefighters and paramedics were each carrying a load of about 5kg during the rescue. This included medical equipment such as a stretcher and other supplies to treat traumatic injuries. 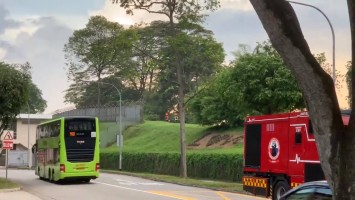 It took under one minute to free the teen's leg from the roots.

Paramedics who examined him assessed that he had dislocated his knee.

Paramedic Nurazhar Hanafiah said: "We had to immobilise his leg and we gave him painkiller medication.

"After that, we pulled him out and secured him on the collapsible stretcher."

It was not feasible for the team to take the same route out of the forest as it was getting dark and carrying the injured hiker through the terrain would be difficult. So they searched for another way.

Some areas in the forest - which has no designated trails - were covered in dense vegetation and so they had to move in a single file to pass through.

After reaching the Rail Corridor, they checked their bearings and headed towards King Albert Park, where an ambulance from Bukit Batok Fire Station had been dispatched and was on the scene when the group arrived.

The hiker was taken to Ng Teng Fong General Hospital.

The entire rescue operation took about 90 minutes from the time of the call.