'Scold me one more time I'll hit you': Hawker and man lock horns over queue at Ayer Rajah Food Centre

The hawker and customer fighting (left), a man intervening (right).

Hady Jay had simply wanted some chicken rice from Ayer Rajar Food Centre when things got a little heated.

And it wasn't because he had added too much chilli.

Rather it was because of an argument that broke out between a fellow customer and two hawkers.

In the video, several customers were seen queueing for their chicken rice at Adam Chicken West Coast stall.

Jay said he then witnessed two hawkers from the neighbouring mixed rice stall shouting at a man dressed in black queuing at the chicken rice stall.

In the video, the two could be heard saying that they wanted to "call the police".

The female hawker then walked over to the man and threatened to hit him.

"Scold me one more time and I'll hit you," she screamed repeatedly in Chinese while shoving, pointing and waving her clenched fists at him.

To retaliate, the man shouted back in Chinese repeatedly: "Hit me!"

In the background, another customer was heard saying: "I don't know whether I should still queue up for this or not."

During the fight, several diners looked on in amusement and one woman was even seen laughing and exchanging glances with another diner.

Eventually, a man wearing purple went forward to break up the fight. 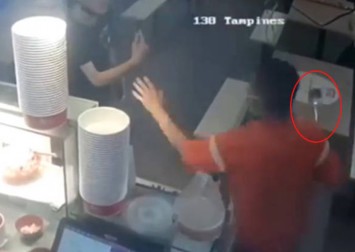 Speaking to AsiaOne, Jay explained that the queue for the chicken rice stall was long and some customers were standing directly in front of the mixed rice stall.

This angered the hawkers there who scolded the people in that queue.

"We weren't even blocking their stall, people can still queue to buy [their] food," Jay justified.

To appease the mixed rice hawkers, those in the queue immediately moved to form a straight line in front of the chicken rice stall.

However, the man in black retorted in Chinese and that riled up the mixed rice hawkers.

Earlier in May, a woman paid $10 for drinks from a People's Park Centre stall but the hawker returned her $2 change in the form of 10-cent and 20-cent coins. This angered the woman as she argued that "it was clear" the former had $2 notes.

Both of them fought and the woman ended up getting hurt and was taken to the hospital.

An eyewitness also shared that the drink stall hawkers would argue with customers regularly as they are "hot-headed".

ALSO READ: Coffee shop denies patron's claim that her 'kopi-o was poured away'