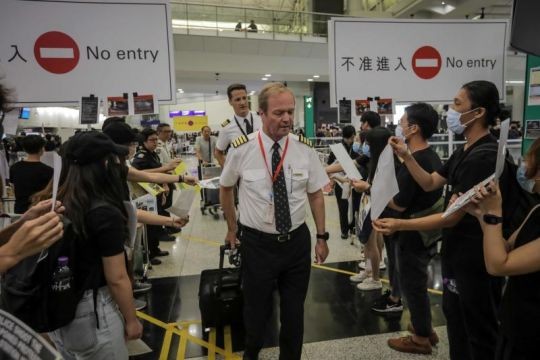 Hong Kong protesters greet the crew from one of the last few arriving flights at the city's international airport on Aug 12, 2019. All flights departing Hong Kong in the afternoon of Aug 12 were cancelled.
AFP

SINGAPORE - A Scoot flight from Singapore to Hong Kong made a u-turn about 30 minutes from its destination, after all flights in and out of the airport were cancelled abruptly on Monday (Aug 12).

Flight TR980, which was carrying 122 passengers, was due to arrive at Hong Kong International Airport at 6.05pm local time, a spokesman for the budget carrier told The Straits Times.

However, protestors staging a sit-in forced all flights in and out of the airport to be cancelled, and the plane's journey was disrupted at around 5.30pm, according to data from flight tracking website FlightAware.

The plane landed back at Singapore Changi Airport at about 9.10pm local time.

One of the passengers, writer Pearl Liu, 30, said: "At first, the captain said that due to the shut down of the airport, we would land in Macau. But then he said that since Macau airport and all other alternative ones in Shenzhen and Guangzhou were also fully occupied, we had to fly back to Singapore."

"I find it a bit troublesome as I have to rearrange things," added Ms Liu, who is a Hong Kong resident in Singapore for a holiday. She is staying overnight in a hotel while waiting for another flight back to Hong Kong at 6am on Tuesday.

"Scoot sincerely apologises for the inconvenience caused," said the spokesman.

She added that affected customers can rebook their flights at no additional charge, for Singapore-Hong Kong, Hong Kong-Singapore, Singapore-Macau, or Macau-Singapore routes, within 14 days of the original flight.

They can alternatively choose to get a full refund on their booking via Scoot travel vouchers.

Singaporeans in Hong Kong were similarly unable to catch their flights home.

Mr Goh Beng Yeow, 40, was at the airport to catch his 7.55pm Singapore Airlines (SIA) flight back to Singapore on Monday, when he was met with the news that it had been cancelled.

"I was already at the airport at 4.20pm, when airport staff made the announcement at the entrance to the departure hall," Mr Goh told The Straits Times.

"The protestors were very near to the entrance, and we were all just standing there waiting for further instructions."

He said he already had a "huge concern" when he arrived at the airport, because the protestors were very rowdy, screaming slogans against the government and police in Cantonese, English and Mandarin.

When he found out his flight was cancelled, he immediately tried his luck to find accomodation at the airport's two hotels, but they were all fully booked.

He eventually found his way back to his original hotel in Wan Chai. Due to the congestion caused by the protestors, a journey which previously took about 40 minutes ended up taking him about four hours.

Mr Goh, who runs audio equipment review website Porta-Fi and had been in Hong Kong since Thursday (Aug 8) for an audio technology expo, has managed to secure a flight back on Wednesday morning.

"I want to get back as soon as possible. I have outstanding matters to handle, such as my meetings which I have had to reschedule."

Mr Goh also shared that he had used the Airport Express check-in feature, in which he had checked in his luggage and collected his boarding pass at Hong Kong Island, before hopping on the train to the airport.

"While they have the facility for people to check in luggage before going to the airport, when these kind of things (cancellation of flights) happen, there's nothing we can do to retrieve our luggage. I'm now stuck in Hong Kong without my spare clothes."

At Singapore's Changi Airport, a total of six flights to Hong Kong were cancelled.

As of 7.30pm, three flights departing from Changi operated by Hong Kong carrier Cathay Pacific had been cancelled. These had been scheduled to depart at 4.05pm, 6pm and 8.10pm.

Two flights operated by Singapore Airlines and one by Scoot were also cancelled, according to the Changi Airport (CAG) website.

CAG spokesman Ivan Tan said: "Singapore residents (due to fly to Hong Kong on the affected flights) have been advised to return home or not to leave for the airport given the current situation. Those who had checked in have been allowed to collect their baggage.

"Non-residents have been advised to check with their airline regarding options available to them which may include alternate flights to their final destination for those who were going to transit in Hong Kong."